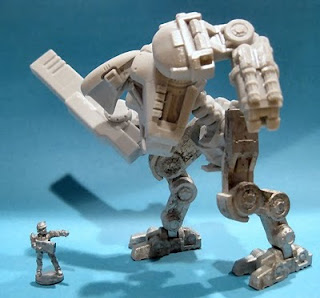 The heavy land asset of the Federal Marine Corp. is the Legged Heavy Assault Cyborg, or L-HAC, pronounced "el-hack." An 11-metre tall chassis made of stabilized osmium, the L-HAC has the brain and spinal column of a deceased Marine veteran installed permanently in a life support chamber deep in the citadel of its chassis. To qualify for installation, during his full-body lifetime the marine is required to have given at least 20 years of continuous and meritorious service, to have been cited for outstanding performance at least 10 times, and to have undergone stringent mental examination to establish his emotional stability and eliminate candidates with any tendencies toward megalomania. Marine volunteers who meet all these qualifications and sign a waiver may be installed if they have suffered bodily injury too great to continue to function as a full-body serviceman but possess a sufficiently-intact brain and spinal column for installation, provided of course that an L-HAC chassis is available. 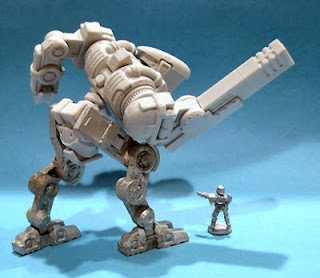 L-HACS are, to the extent possible, deployed in support of the regiment in which they served as a full-body asset; although the identity of the former full-body is supposedly kept a secret, marines who served alongside the installed veteran will admit off the record that they quickly recognize echos of the full-body's personality in the behavior of the titanic machine.
On very rare occasions an L-HAC is temporarily assigned to a regiment from the one in which he served as a full-body, or even another division, but this is generally an expediency dictated by combat losses. The L-HAC is immediately transfered back to his old unit when a replacement is available.
One remarkable exception was L-HAC 42R-4, a Royal Marines L-HAC of 42 Commando posted temporarily with the 1st Battalion ("Timberwolf") of the 2nd Marines during the Third Pelagic War on Sepulveda 7. The 2nd, like most Marine Divisions, was heavily composed of men from the FUSA (Former United States of America), but heavy losses required that a Royal Marines L-HAC (designated with an "R" after their first numeral designation) be posted to the 1st Battalion, which had lost all of its L-HACs in combat. At first received reluctantly (to put it mildly), this L-HAC was eventually held in such esteem by Timberwolf Battalion after the final battles on Sepulveda that a virtual mutiny broke out when its redeployment orders were digi-commed into Division HQ. As a special and one-time exception, L-HAC 42R-4, or "Tommy" as he was called by the Timberwolves, was thereafter permanently attached to the 1st Battalion. When asked why they were so fond of this L-HAC, one lieutenant said, "it's hard to say. There are lots of little differences in this particular unit, of course. But those little peculiarities grew on us, and he is good -- he saved our lives so many times, we figured that he belonged with us. He seems to agree; he's happy to be with Timberwolf Battalion. We went through a lot together, after all."
The main weapons system of the L-HAC is the Weintraub AstroSystems Battlemaster 30cm Naval Rifle, a fleet-grade teleport cannon, so called because such weapons operate by teleporting selected portions of their targets where designated by the gunner. To illustrate, a targeted swarm of space demons can be teleported into the center of a mountain or into the void of space, either of which naturally constitutes a kill. A large target such as a tank or structure will have a targeted portion, such as a turret, teleported away from the remainder, thereby rendering it out of action. The L-HAC has some choice in the matter on the destination of teleportation, L-HAC 42R-4 apparently being fond of teleporting targets 200 metres into the air, or teleporting groups of enemy infantry into other groups of enemy infantry, thereby achieving a KIA on both groups. Battlemaster Naval Rifles are extremely potent weapons most often seen in the turrets of battleships of the Federal Navy, and this armament permits the L-HAC to engage enemy fleet assets in orbit around the planet. 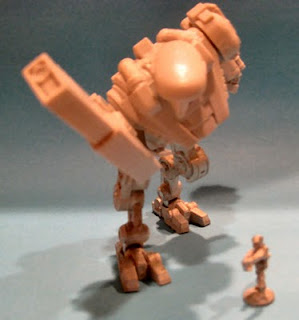 Blurry photo of the business end of the Weintraub Astrosystems Battlemaster Naval Rifle.

The L-HAC also has a large claw hand for manipulation or close assault if necessary, and mounted on this are double 40mm gatling guns. It possesses sophisticated communications arrays and can use the Battlemaster for non-weapons purposes as well, teleporting individual persons or small objects in a non-lethal transport capacity, but this is more time-consuming a task and only rarely done on the battlefield.
In addition to its weaponry, the L-HAC can also serve as a Medevac unit, an extensible antigrav stretcher being mounted on the bottom of its left arm which is capable of lifting an injured person with great care and inserting him into one of three Medevac stasis chambers in the chest of the L-HAC, temporarily halting any deterioration in the medical condition of the patient until he can be transported to a field hospital. 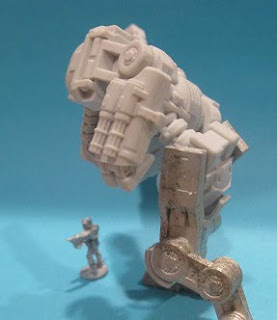 A look at the Medevac stretcher generally tucked under the left arm of the L-HAC.

The L-HAC model was prototyped by Mark Mondragon, printed by Moddler and cast by Valiant Enterprises. It's quite posable and you can put the model into hundreds of different positions, as I've hopefully demonstrated with this model. The legs are however only of limited posability, a choice we made to keep the model stable. The legs and feet are made of white metal for stability -- though leaning far over, this model is standing up by itself. Standing at its full height it is over 10 cm (4") tall so it will make an imposing tabletop presence even for 28mm gamers -- for that matter, even for 40mm gamers! 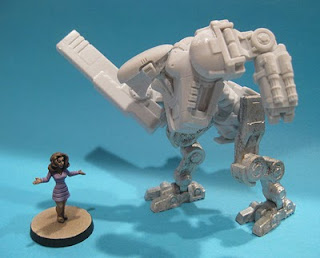 Apparently having travelled through some time portal, the L-HAC enjoys listening to Minnie Apliss, one of our 1970s pulp 28mm figures.

I thought that, rather than make another tank as the heavy unit for the Federal Marines, I'd make something in human shape, to represent the Federation of Man in his future triumphs and follies in space. He's a tribute to all of those people who, once we've lost them, become somehow even more powerful in our lives. It's wishful thinking, but it's nice to think that they can come back and continue to be there for us, loyally helping us out, after we think they are gone forever. The model is being production cast now by Valiant and should be available in a few weeks, after it gets painted up for display -- though it's huge so I'm a little afraid of what the painting fee will be!
Posted by khurasan miniatures at 7:22 PM