The Biology of Sepulveda 7: Part 12, the Sepulvedan Sponk 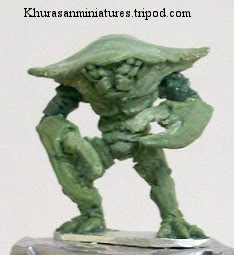 3Digimage of Sponk that wiped out a squad of Federal Marines outside Ozli. The 3Digimage was created using blurry digifilm from one of the marines' gun cams.

By early in Month 9 of 2654 (Fed. Reckoning) the Federal Marine battalions covertly assisting the Resistance had driven the XIV Control Battalion to the outskirts of the city of Ozli and were already planning to pursue them into the scrubby countryside just south of the Ozli/Hassings mines. Although dressed in typical Resistance outfit and using Resistance weaponry, they clearly demonstrated the training and discipline of the Marines in their operations. Now that they were planning the probable pursuit in the countryside, the Resistance liaison officers working with the Marines increasingly warned them about animals in the countryside around the mines that preyed on humans venturing too close to their burrows. The Marine officers listened politely but paid this little heed, assuming that when the locals referred to “Sponks” (some of the southern Resistance fighters pronounced it “Spunqs”) it was a colourful local term for the Parasachnids that had gone native on the planet and were now a perennial annoyance. The Marines had dealt with Parasachnids before and believed they would not impede operations, even given the relatively crude weapons they were issued for this mission. Nonetheless, an order was issued that the locals were warning of probable Parasachnid hives and that the usual precautionary measures should be employed.

These measures proved entirely inadequate to protect the first patrols from what they found waiting for them in the ground on the northern outskirts of Ozli.

The Sponk is a large invertebrate that is endemic to Sepulveda 7 (a planet in the Jol Freehold). It is a xenocrustacean generally found in all temperate and subtropical environments. An apex predator outside Sepulveda’s famous angravean fields, it usually reaches heights of roughly three meters and weighs more than 3,000kg. The Sponks is primarily an ambush predator. It will dig a burrow with a trapdoor made of area soil and vegetation, which substances are bound together using a gluelike substance which the animal emits from its mandibles. The trapdoor is particularly hard to detect on the ground. Invariably the burrow will include a vertical hunting chamber large enough to hold the animal, these being called “Sponk holes” by the human population of Sepulveda. The trapdoor is draped carefully over the hunting chamber, and a hinge is made to keep it in place. If prey is of sufficient abundance in the area that repeated kills are made from the same hole, the animal will generally settle in, digging horizontal tunnels from the hunting chamber to a central den. There are generally several transit tunnels branching out from the den, leading to multiple hunting chambers.

Once it has dug its hunting chamber and redistributed the excavated matter, which can take as little as two minutes, the animal will position itself in the hunting chamber, affix the trapdoor, and wait. It is not well understood how they sense prey, as it is extremely hard for naturalists to study the Sponk even under the best of political circumstances, but it is believed that the animals can sense the slightest vibrations in the ground. It has further been observed that, if the animal senses multiple prey subjects in a group, it will wait for them to pass over or around the hole before slipping out to apprehend its prey, invariably a straggler, so that the Sponk will not be detected by other members of the herd or pack (or squad).

The Sponk’s carapace has points on either end which flip the oval trapdoor open when the animal emerges so that its claws are free to grasp the prey and pull it down into the hole. This all happens so rapidly and silently that the prey animal seems to simply vanish even when it is being casually observed, the Sponk and the prey seeming but a blur as they disappear together into the Sponk hole.

In describing the Sponk's hunting methods, some naturalists have drawn comparisons to an extant Terran predator, the trapdoor spider:

To silence the struggling prey without it giving away the location of the hole, the creature has evolved an uncanny aptitude for decapitation, seeming to sense the location of a prey animal’s head even if the prey species is not endemic to Sepulveda. This has prompted some naturalists to suggest that the Sponk is an intelligent life form, but it has proven impossible to obtain a living specimen for study.

The primary weapons of the Sponk are its formidable claws, powerful enough, it is said, to pull the treads off armoured fighting vehicles which are mistaken for prey. Once the meal is in the hole, the creature uses these claws to pull it apart into small pieces which are very rapidly fed into its mandibles. Prey is eaten bones and all. The Sponk will often make multiple kills from one herd or group on animals, especially if they return to the area of the Sponk hole to search for the missing member.

To defend itself the Sponk has a remarkably thick and hard shell which covers its entire body, even its eyes being effectively plated. The local population has noted that most calibers of small arms ammunition cannot penetrate the shell of a Sponk, even if an entire clip of it is emptied into the same location on the animal.

Sponks are territorial and only one will occupy a given location, the size of each plot of territory usually depending on the abundance of prey. Sponks attack each other on sight and cannibalism is a normal part of their diet. Sponks that have hunted out an area will move to a new feeding ground, and will at times hunt above ground as they seek a new location. If a Sponk hole is subjected to persistent harassment from an attacker the Sponk will rapidly bound out of the hole and defend it from the ground level, invariably fighting until all attackers are dead or have fled, or the Sponk itself is killed.

The Jol Freehold does not have a method of classifying the conservation status of animals, but the Federal government on Terra considers the Sponk to be a threatened species, due largely to the Parasachnid infestation of Sepulveda (P. Level 2). While Sponks prey on Parasachnids (which have in fact become a staple of the Sponk diet), the primary threat from the hive-dwelling Parasachnids is that they are outcompeting the solitary Sponk species for prey.

No reliable information is available on the lifespan of the Sponk or the manner in which it reproduces.

Several local sports teams on Sepulveda are named the “Sponks” due to the pugnacious nature of the animal.

Posted by khurasan miniatures at 4:38 PM