People asked for Chewk cavalry. Yes, I know, I'm not sure why either, and wasn't going to make them, but then I picked up History of the Chewk Nation by McCullagh and sure enough I read repeatedly of outflanking charges led by the Chewkavalry, or Chewks mounted on Chewkorses.

I looked into it a little further and my suspicion that this was not a reference to the Chewkamel was confirmed -- the Chewkamel is a skittish creature and whilst quite strong is not fast and not brave.

But the Chewkorse, also called the Munga, is both of those things, and more. So I had some made to represent this important part of Chewk military forces. Here's a preview pic, there will of course be multiple poses of both Munga and riders. 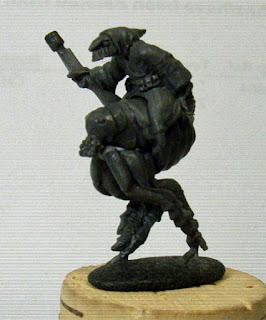 The Munga is remarkably fast, and can jump absolutely incredible distances, the little Chewk hanging on for dear life, until the Chewk kicks the sides of the Munga with his feet, and the Munga resorts to running in a cursorial fashion (very fast at this as well).

The Munga is capable of delivering a massive kick in close combat.  Perhaps more terrifying still, it can deliver a stabbing bite that causes the creature to suck blood, for the Munga is a carnivorous animal, tracking down prey in the great Sepulvedan equatorial deserts and sucking the blood out of them.  But a Chewk and his faithful Chewkorse bond for life, and the mount would never resort to sucking dry its rider.  Well, probably not.

Probably out in late summer to early fall -- stay tuned!

postscript: McCullagh, author of the aforementioned book, was a human who was sent to commune with the Chewks in order to bring them over to the Federal cause against the Joli Freehold.  In this he succeeded beyond anyone's anticipation, and as a result is sometimes called Gareth of Sepulveda.  It is said that he was so transformed by his time amongst the Chewks that upon returning home it was not uncommon for people to stealthily glance to see if he had grown filtration gills under his jaw.
Posted by khurasan miniatures at 4:17 PM 4 comments: