Kingdom of the Jasmine Throne Released

We’re pleased to release our newest range of 15mm sci fi figures, the Kingdom of the Jasmine Throne. 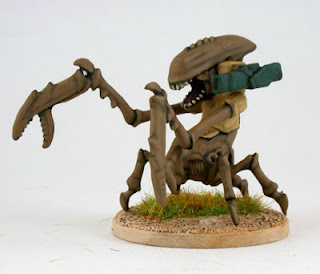 
The Jasmine Throne is one of the “freeholds” within the Federation which gained defacto independence during the First Pelagic War and carries on generally friendly relations with the Core Federation. It is ruled by a neo-Sassanid monarchy, and whilst its military is by and large made up of the human forces of the great planetary satrapies, its bedrock of military strength is the JTFB, the Jasmine Throne Foreign Battalions, a rogue’s gallery of aliens recruited from around the galaxy to serve and protect and monarch and the monarch only.

They are subjected to some of the fiercest training and discipline in the universe, and it shows! In order to prevent plotting in the ranks, each section, and to the extent possible each platoon, is composed entirely of different species of aliens.

Our initial release for the Jasmine Throne military forces is six sets of models, five sets of JTFB troops and one set of Satrapal levies. 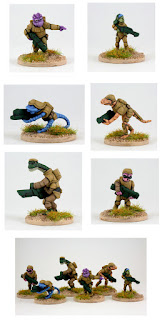 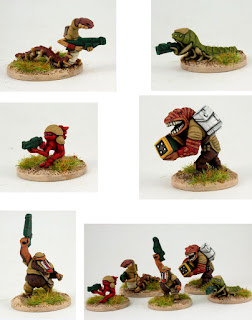 The third JTFB fireteam has four with anti-matter carbines, and one with a heavy missile launcher. 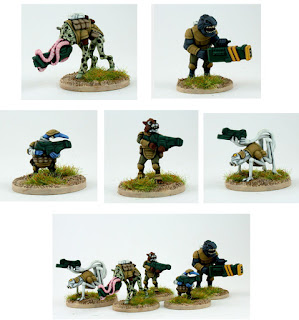 You may recognise in the ranks of the fourth team a certain scrappy little fellow! Quar imagery used at the suggestion of zombiesmith – thanks for that Josh. 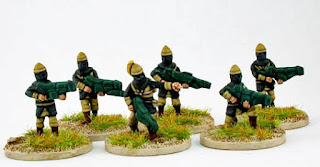 We also have a section of Satrapal Levy Infantry of the Jasmine Throne, raised in great numbers by the planetary satraps. They may not be as fearsome as the JTFB, or as prestigious as the elite Asavaran nobles in their grav chariots, but they get the job done protecting over a dozen worlds from pirates and invaders. And the levies of two planetary satrapies, Dai-lam and Sa-bir, are legendary for their ferocity, so it’s never wise to assume that Satrapal levies are second-rate troops! 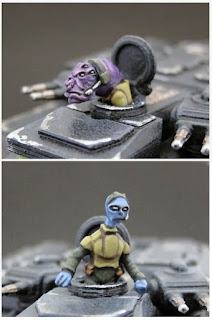 To give the JTFB some armour support, we have a pair of JTFB tanker halves to adorn your tank hatches. They are a perfect fit for our Nova Respublik tank hatches, but also fit in the hatches for our Federal and upcoming MDMS vehicles and Karkpanzers as well. The Kingdom buys its vehicles from a wide variety of sources so any of these would be fine.

There’s more to come in the range, including Major Histar, a higher commander of the JTFB, Mako gun carriages with heavy autocannons and heavy mortars for both the JTFB and the Satrapal levies, and even a model for the young queen of the Jasmine Throne herself, Roxann Diamunda, this last one sculpted by Tom Meier.

The models were sculpted by Iain Colwell and painted by Steve Dean, except the tank crew who were painted by our own Spacejacker. Thanks guys!

Available now – join the JTFB in its battle cry, “To the queen!” Happy gaming!

Posted by khurasan miniatures at 8:45 AM 5 comments: