The Sisters of Celestial Peace

Sister Maria Jesús Ágreda slapped another magazine into her Purifier and wiped the sweat from her brow, peering out into the night from the rocks where her unit, the Second Convental Battalion, was holding onto a perimeter. There was a lull in the attacks and her thoughts strayed for a moment to the Kelnar-ji in the bunkers, their little feelers waving anxiously as the air and water ran out. The space demons had overrun the convent, but that could and would be retaken – loss of the Kelnar-ji village meant the loss of the Kelnar-ji themselves, and Sister Maria would not allow that to happen to those gentle souls. She thought of the little blue-green Kelnar-ji young running around at her feet as they played and her resolve doubled – May our Lord and the Way protect us and our flock from these abominations.

There was a splat near her and she ducked reflexively, a sizzling blob of acid spraying deadly droplets all around, one burning a hole in her habit.  Sister Maria knew the source and scanned for the Hammerhead that had shot at her, and saw it and two others slinking back toward a rock formation, about twenty yards to the southeast, Satanic grins on their faces. She watched them disappear behind the apparent safety of the rocks, raised the muzzle of her Purifier, and slipped her finger down to the grenadelauncher trigger.

Quietly she said a prayer and judged the angle – she was the best grenadier in her unit, and she knew the prayer was not necessary, but she said it anyway. These abominations had messed with the wrong nun. There was a metallic thud and the grenade was on its way, on a path to help cleanse this world of these daemones incarnatus ….

After the Visitation, humans abandoned previous religions for a time and followed the Way. But as the Visitors were leaving, they predicted, accurately as always, that the effects of their visit would fade as the decades wore on. They said this with a gentle and understanding smile, reaching their long slender arms out to touch the heads of the humans who gathered around them. The people wept to hear this, fearing that the transformation that changed the world would reverse itself and humanity would slip back to its old ways. They remembered war and poverty, jealousy and fear, and they begged the Visitors to stay, fearing that all the old human vices would return. That didn’t quite happen – the Visitation left its stamp on humanity forever more -- but as the Visitors became only a memory, humanity did to some extent get back to its old business, with all that entailed.

Most people continued to follow the Way, in a less joyous and more formalistic way as the decades wore on, but there were some who never quite forgot the old religions and cautiously crept back to them, one small step at a time. This was especially true of Christianity and Islam, although at first even those two religions budded in only a few places. Roman Catholic Pope Boniface XI, who like everyone else had promptly embraced the Way during the Visitation, called a Fourth Vatican Council to discuss what, if any, future lay ahead for the Catholic Church. A surprisingly large number of cardinals and bishops responded, and the focus of the Council was whether Catholicism was to continue as a religion at all, and if so if it were to be one path of the Way, or if the old form of Catholicism would be resumed. No decision was reached, and there was for a decade a schism in Catholicism between the Traditionalists and the Way Catholics. Upon the death of Boniface, these two factions came together to elect a new pope, John Paul VIII, who held the Fifth Vatican Council, which healed the schism and sent the religion on a surprising new journey.

One of the principal documents of Vatican V was Excelsis Deo, God in the Heavens, which recognized certain alien life forms as having souls and which therefore require salvation through Jesus Christ and the Way. The Council established a Celestial Council to evaluate alien life forms to determine whether they have souls and to preach to those who do, who are designated Christ’s Celestial Children (abbreviated as “3Cs”).

Throughout the new Federal colonies, and on worlds on which alien life forms had been discovered, the Church sent missionaries, established monasteries and convents, and performed charity for countless life forms. Especially active in this work were the Sisters of Celestial Peace (SCP), a religious institute established in the F-SAR (Former South American Republics) zones and which gained adherents throughout all of the zones of Earth with any Catholic presence. The sisters live in convents all over known space and perform good works, almost always focusing on the 3Cs.

This life has dangers, as indeed such a life always has, and the sisters face these with the same peaceful resolve that men and women of the cloth have faced violence and persecution for centuries on Earth.

But some threats are of a different order.

The same Celestial Council that had been empowered to designate aliens as having immortal souls was also tasked with a darker duty – to classify certain life forms as the incarnation of demons. This classification, “daemon incarnatus,” is naturally a very serious matter and has only been rarely invoked, and then only in consultation with the Pope and the College of Cardinals. The first and most famous example of such a classification was with respect to the Space Demons, after these extinguished civilisation on Obnial 4, a planet of sentient insectiods on which the Church had established a successful 3C mission.

Just as spiritual demons are battled by the Church using the document De Exorcismis et Supplicationibus Quibusdam, physical manifestations of demons are battled by both monks and nuns wherever they threaten the faithful. As they are one of the most active of the new religious institutes, the Sisters of Celestial Peace are often in the front lines of such battles, and toward that end their daily training and ritual includes battle tactics and weapons handling, harkening back to the military orders of Medieval Earth.

As a public relations gesture, the transplanetary defence contractor Mercanto-Dett Military Solutions (MDMS) has developed specifically for the SCP a lighter version of the pulse rifle used by Exterminators -- the Purifier (sometimes disparagingly called the “nun gun” by the Army), and provides refurbished armoured vehicles to the order as well. When possible the Federal Army also provides vehicles and support equipment.

The sisters fight in a version of their traditional habit in order to continue to bear witness to their faith before the masses to whom they minister. Although certainly a departure from what was traditionally expected of women who have taken the solemn vow, the defence component of the life of the Sisters of Celestial Peace has proven to be a vital element of the defence web in more isolated regions of Federal Space. 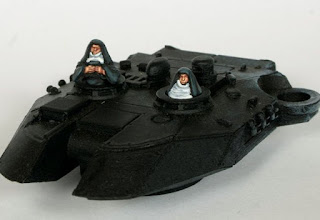 We have created a first batch of SCP sisters in combat poses, four armed with the Purifier light pulse rifle and a fifth packing the formidable light machine gun. We have also created a set of tanker nuns to put in the cupolas of your vehicles. If there is interest in the range, more will be made, including a command set and perhaps even such colourful personalities as Sister Francine Loyola, the wheelchair-bound nun who was famous for her uncanny accuracy with a heavy rocket launcher.