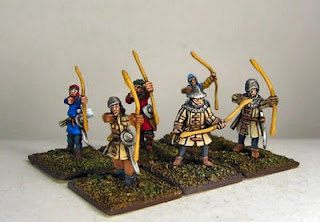 On the 664th anniversary of the Battle of Crecy, arguably the battle that made England a great nation (at least, in the eyes of the rest of Europe), we are previewing two codes from our upcoming 15mm Crecy line. These will compliment our existing mid-14th century line, the Early Swiss, and we hope to eventually make many other nations from that period as well. (I was going to call it "Circa 1350" but it occurs that it could just as easily be called the "Black Death" line!)
Above are the English archers, three armoured and three unarmoured. Every effort has been made to fix their armour and dress so that they are accurate for that fateful battle in the twilight. 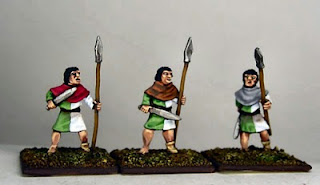 Also being previewed are the Welsh knifemen, who had a spear and a long knife with which they ruthlessly finished off wounded French men-at-arms.
The foot knights and command will be previewed when the painter is back from holiday! All models are cast and ready to be sold as soon as all are ready to be displayed for sale, perhaps within a month.
Posted by khurasan miniatures at 4:10 AM 4 comments: