Nalle and the reindeer

Well, ok, it's not quite a reindeer, it was a small whitetail doe who hangs out up the ridge a bit from our house. My dog Nalle and I sometimes encounter her when we are on walks in the early evening, but we hadn't seen her once since the hurricane.

So i was very pleased to see her on Christmas Eve of all nights, perhaps scouting location for her kin who will be so busy tonight. Nalle is a Finnish Spitz, a breed born to bark, and she had a few choice words for the doe before we turned around and went back to the house -- I had a few more gifts to pack, and then orders to catch up on! But not before I got a snap or two of Nalle and the doe. (It was getting dark so I lightened the image a bit.) 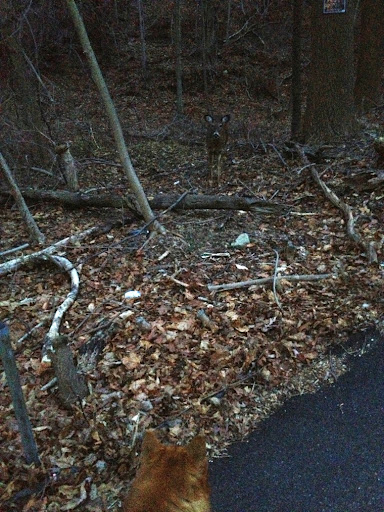 Happy holidays to everyone and thanks for making this our biggest year ever. Many new things coming in 2013!
Posted by khurasan miniatures at 4:25 PM 4 comments:

The Hauk looked to the stars and wondered.  They knew they were not alone, the only race in all of infinity to think and feel, to be aware of what it means to be alive.  They felt this in their hearts, and the telepaths, mostly hatchlings and hens, could sense that it was so, with great certainty in fact.  But all feelings aside, they also knew it as a fact.  For in their ancient past, they had indeed not been alone – two sentient races had evolved on Pandion at the same time, but now only one, the Hauk, survived.

The Hauk were slower to reach sentience, and when they did the Krall were already sailing great ships upon the three seas, scrabbling across the decks, their black carapaces glistening with the salt water spray.  Anchoring themselves to the galley roof hang-racks using their spiky tails, the Oar-Kralls swung upside down and rowed, four oars to each Krall, as they chirped out songs in time, songs about seafaring ancestors, their antennae waving in unison as they sang together.  Crowning the head of each Krall were seven lidless round eyes, arranged in a circle, and each of these peered out anxiously across the endless grey sea, searching for land.  And find land they did, having settled two other continents and numerous islands beyond their own. 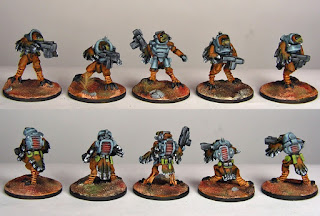 Hauk rifle infantry
On one fateful morning, when a boatload of Krall found land, they found the Hauk too -- savage feathered creatures, utterly unlike the Krall, running swiftly on a single pair (a single pair?) of hindlegs across the plains between the great coniferoid forests, hunting with a primitive missile weapon resembling a sling.  Stranger creatures than these no Krall journal had never recorded, and for their part the Hauk were terrified by the black monstrosities that swarmed like so many great scorpions up and out of the tall ships anchored to the shore. 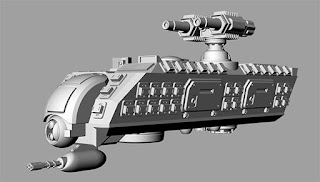 This Hauk grav APC has only one chin rotary gun mounted but many mount two, or a pair of seeker missiles

After many false starts the Hauk and the Krall established rudimentary communications and then an accord, and the Krall set about teaching the ways of civilisation to their new charges.  And this was their undoing, for within four generations the Hauk had utterly destroyed the Krall and extinguished all evidence that the black arachnoids had ever built cities or sung songs together as they sailed the grey seas.  Hauk cities (built above the ground this time) and Hauk fleets replaced these.  Hunted without mercy, not a single Krall survived, although there were rumours – just old hen’s tales really -- that in the deserts, hidden in caves, individual Krall endured, and stole the souls of unwary Hauk in vengeance for what had been done to their world. 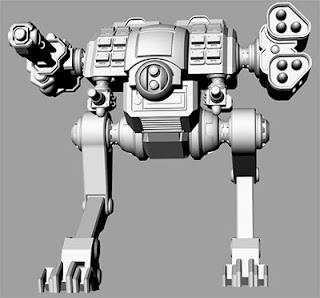 For millennia this story was passed down as an inspirational myth amongst the Hauk: The cleansing of the world of the black abominations that streamed out of crevices, clicking.  But as Hauk civilisation matured and weathered war after war between their great nation states, they came to understand themselves better for what they truly were.  Hand in hand with this growing awareness came scientific research and analysis of the tiny fragments of Krall culture which remained.  Jaded Hauk society began to actually mourn the ugly, beautiful creatures they had shared this world with so briefly, so long ago. There was a Krall craze in Hauk culture.  Romantic female Hauk took Krall names when they reached maturity, to the exasperation of their parents.  “Krall Epics,” animated drama vids set during great moments in Krall history, were produced and became hugely successful, being watched by millions of Hauk, even across opposing nation states.

To a bird, each Hauk yearned for another chance.  They wanted to meet a new civilisation and join it, partners in the stars.  And surely this was close at hand?  Hauk hatchlings often had the gift of foresight, and they were sensing a contact, a joining of sentience with sentience, and sometime soon.  As these stories spread out across the great nation states of Pandion, a thrill rippled through Hauk society, and they looked up to the stars and hoped.  Hauk frigates, now capable only of travel within their solar system (Pandion was the fourth planet from their star), sent out hailing messages on many frequencies.  Probes were launched radiating a greeting.  Many felt it was only a matter of time now.  Finally they could atone.

The Meso-Nai battlecruiser now entered the solar system, shadowed by its light cruiser escort.  The two great intergalactic travelers crept through the blackness with a purpose, headed for the fourth planet from the star.  While this was just one of the infinite number of star systems willed unto them by great god Urodela, this fourth planet represented a special threat to the Meso-Nai way of life.  For against all logic and in an open challenge to Urodela’s infallible word, the planet was showing signs of a self-aware civilisation. 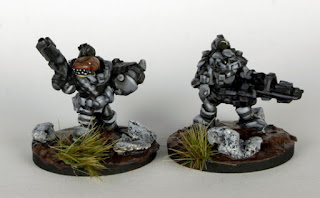 Naturally, seen purely objectively, this was preposterous.  Even a half-educated Salamandroid was aware of this.  Urodela had shown the Meso-Nai long ago that dominion of the universe was theirs and theirs alone.  But there was something real about these signs, these false echos of civilisation – as the Meso-Nai priests knew, they were a real manifestation of Meso-Nai faithlessness, of doubt in the God who had so generously granted all to them and them alone.  These perceptions of other cultures were a sin, a crime against God, and needed to be purged with an iron will and ceaseless devotion.  Confronting these delusions, wiping them from the minds of the faithful, was the only way to fortify the soul and make amends to Urodela for this grave lack of gratitude.  This required violent exertion.

Meso-Nai Reach Force Braves, ready to banish impure thoughts with the application of a great deal of firepower

Such had been the pronouncement of the priesthood which stood at the summit of Meso-Nai society, and the Reach Force, the Meso-Nai interstellar colonial force, made it so.  Using one tactic or another, the Reach Force would forever banish all delusion from these planets.  Yes, violence was indeed the key, for, as they had found, only cataclysmic destruction silenced all doubts as to the exclusivity of Meso-Nai sentience in the universe.  Such was the faithlessness of the Meso-Nai, a heresy within their hearts which they were keen to overcome. 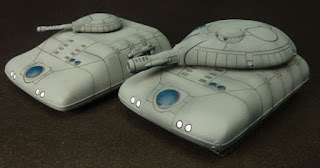 One common method was to induce the explosion of the star at the center of the problematic solar system.  If Meso-Nai self doubt did not permit this method – self-doubt which often manifested itself as an imaginary fleet of “enemy ships” preventing the painstaking process of nova induction -- then the Reach Force would regroup, acknowledging, with great shame, that heresy was embedded deep within their own hearts.  This demanded that the planet, from which such impure thoughts radiated, must be invaded, occupied, and scrubbed clean, purified.  It was a terrible process, but it had been done before and would be done again.  The lives of many Reach Force braves were often spent along the way; Reach Force veterans knew well that doubt might be a mental failing but it could, and did, physically kill.  But at least once it was all over, and the doubts that inexplicably emanated from the planet’s surface were forever silenced, the surviving braves felt their faith invigorated.

The captain of the battlecruiser swam up to the upper bridge, surfacing from his immersion pond, and evaluated the readings coming from the fourth planet.  What a cacophony. He was filled with shame, but also determination to be a better Meso-Nai.  There would be a great test of faith here, but the Reach Force was ready.

by all Meso-Nai Reach Force Braves
We have already released models representing the extreme xenophobes of the Meso-Nai Reach Force, and the first codes of their greatest enemy, the Hauk, will be released soon.  As can be seen from the above image, the Hauk quickly learned to defend themselves, adopting weapons to fight back against the Meso-Nai campaign of extermination, but could they reach out to the Federation to avoid the fate looming over them?  Stay tuned for details.
Posted by khurasan miniatures at 12:02 PM 4 comments: