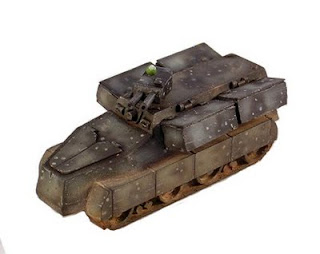 The Karkarines are amphibious creatures that evolved from fish similar to earth's sharks. Their body form permits them to inhabit shoreline areas and to live in both the sea and on the land, a strong advantage for a sentient life form.

The Karkarines are the main line infantry soldiers of the Pelagic Dominate, and when their Cnidarian masters call them to war they fight in the very powerful, advanced tech anti-grav vehicles that the Cnidarians provide.

However, they have also ranged far and wide throughout the galaxy themselves, serving as mercenaries for any party willing to pay their price. They are not very good as garrison troops but are an excellent choice as troops to buy before a battle, for they are brave and have a serious attitude toward war.

When they serve as mercenaries they do not have access to the grav tanks of the Dominate, but that does not mean they go to battle without armoured support, and their forces are in fact highly mechanized. The most common vehicle used by them is the Karkwagon, an armoured personnel carrier offering a good degree of protection agaist small arms fire and shrapnel. The vehicle is fully tracked and has two heavy hydroplasma cannons as its main armament. 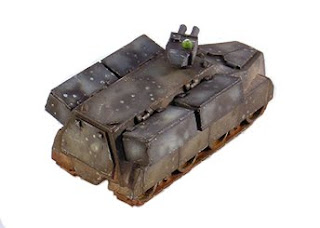 The vehicle is cramped and uncomfortable for humans but the Karks like it that way, their traditional form of social interaction being to stand or swim in close proximity to each other. The vehicles carry four large boxes which are filled with water before the vehicle goes on a mission, as when the squad deploys the rear door opens and much of the water in the vehicle escapes. When the squad remounts, the door is closed and the water pours from the spare tanks into the vehicle. The Karks can get by indefinitely without water, as they can extract oxygen from air as well as water, but they greatly prefer to have water flowing over their gills. 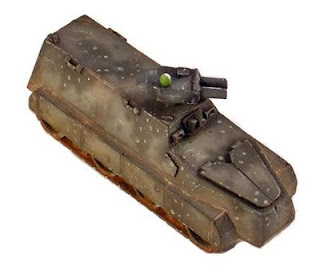 The Karks widely export the Karkwagon as well, and when they do most races naturally prefer to use the spare water tanks for storage. Some remove them altogether. The vehicles are cheap and simple, being welded plates for the most part, but they get the job done, being well-armoured and having good speed and reliability.

These vehicles, as well as the equally ubiquitous Karkpanzer, were used in great numbers in the Molch Vornid War.

The Karkwagon was designed for sci fi or Weird World War II gaming, and was sculpted by TMP's "Grabula." It is not a CAD design, it was made the old fashioned way! The kit is all resin and easy to assemble. The spare boxes are optional and any or all may be left off. The mail hull piece, not including the tread assemblies, is about 2 1/4" (57mm) long. Coming soon.
Posted by khurasan miniatures at 1:24 PM No comments: 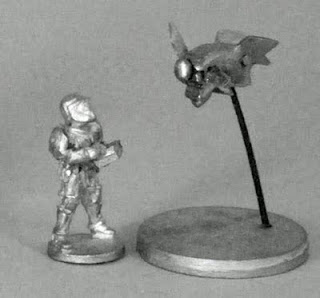 Here's an advance look at the infantry drone often attached to Federal Army infantry at the platoon level. Remotely controlled, each of these micro-drones is capable of travelling along the walls of city streets, into a major built up structure or deep underground into an enemy bunker via an air duct or other entrance to deliver vital intel on enemy movements.

And for those moments when causing a little mayhem is in order, the drone will be able to mount an optional rack of F&F micromissles.

This is just one of a whole series of new items being cooked up for the Federal Army by Mike Broadbent. As usual, Mike's done a splendid job on this piece! Stay tuned for more intel.
Posted by khurasan miniatures at 8:19 PM No comments: