Our 15mm M2189 Caiman Heavy Infantry Combat Vehicle is a very popular model -- we have trouble keeping it in stock!  So we've decided to add that vehicle to our upcoming line of 28mm Sci Fi vehicles, and have had it printed.  Here's a first peek at the print.  Sorry the photo is blurry, I'm afraid that's about as good as my photography gets. 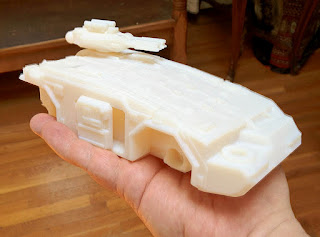 I gasped when it came out of the box -- it's breathtaking!  As a person used to 15mm scale vehicles, it's quite an eye opener to see the same armoured vehicle in 28mm scale.

In other 28mm news, our equally popular M3918 Polecat Armoured Light Utility Vehicle is in the process of casting now, and we've already sent one preview casting off to a top sci fi vehicle painter to be finished for display.  Stay tuned for further developments.
Posted by khurasan miniatures at 10:55 AM 12 comments:


Not long after the Control Battalions began their patrols in the major Sepulvedan cities, and their midnight roundups of citizens began the decapitation of the political arm of the Resistance, a DPLS light freighter landed at Deadhorse Junction Starbase. It was carrying a load of vegetables (some Terran, some more exotic), some crates of digicells, and a few passengers, including a massive man and his tiny daughter. The customs officers checked everything out and nothing raised any suspicions, though one officer thought the relationship between the girl and the ox of a man was peculiar, almost like two mates rather than father and daughter. But their iris-scans were all clear, parent and child, so off they went into the terminal, toward a new life, and, as the customs officer knew, a bleak one. The big guy, Frank Tornado, had declared that he was here to take a job at Active Mine 71, and Jelina was driving the angravium mines hard these days. Good luck, big guy. Glad I’m not you. And the kid ... what with no mum to look after her, and Prive-Ed being for only the privileged few who could afford to send their children ... what would she do all day in the prefab shack where she would no doubt be locked up as her dad sweated it out in the mines? Probably stare at hols and brush her doll’s hair all day. Stay well inside, sweetheart, because there’s danger on the streets of Hanley, the mining town outside Mine 71. The customs officer heard the boom as the DPLS left the port again, just a quick hop for the ship, and he got back to his digi-work, putting the twosome out of his mind.

“Daddy, I got another one,” Teacup told her father, who loomed over her, a dirty dish in one huge hand, a soapy sponge in the other. She took off her wig, part of the little costume disguise he had her wear whenever she was killing something. “That’s two in our second day here. And it was clean, the others didn’t even see what …” Frank Tornado shut Teacup up with a single shift of his eyebrows. He knew what she was talking about – she’d erased another one of those helmeted freaks that the Freehold was using to squeeze this planet. This kid, she was good, but still only eleven and just a bit too enthused about her skills. “You’re making too much NOISE, honey, and daddy’s tired from his first day at WORK.” She nodded quietly, remembering. He’d been briefed by Federal Intel before they left that these “Sepulveda Huts,” as the pieces of crap were called, were often bugged, and the Freehold's control forces had deployed SonEars all over the miner neighborhoods to monitor conversations. The miners were a hotbed of the Resistance, and of course that’s why he was here. Liaise and organize without getting caught, maybe even set up a new Resistance network to replace the one that was now being decapitated.

The Federal government had had enough of the Jo-li Freehold, and Sepulveda was where it was all going to come to a head. So they’d sent Frank to pay the planet a little visit.

Teacup -- her name was Jill, but everyone called her Teacup because of the delicious irony of it -- would come in very handy if things got out of hand. He was a trained killer, but Teacup? Forget it, she was just ridiculous. He couldn’t believe it when they gave him a three-year old girl, an orphan they claimed, and told him to train her as an assassin, but she changed his mind right quick. By the time she was five she’d scored her first clean decapitation, and she was so proud. Look daddy, no blood, it cauterised! Only eight years of training (he’d needed twelve) and she was already worth five of him in hand to hand combat, and was at least as good with both chemically-propelled and energy weapons. Her only weaknesses were her small size and lack of strength, but she had so much skill these things really didn’t matter. It doesn’t take much strength to cut a throat if you know how to do it right. And yeah, she knew how.

He’d trained her well, but this was no ordinary girl. No ordinary human, boy or girl, could be so good, so soon. What was she? He had no idea, but putting his knowledge into her head was like dropping a hammer onto a box of pure nitro. She was very much what her name suggested, a tornado in a teacup. He finished the dishes and watched her play with the old-fashioned dartboard, first a bulls-eye, then drilling the second dart directly into the bulls-eye dart, then the third into that one, and so on. “Let’s see how many I can stack before they fall off the board, Daddy,” she said.

Frank was good, but he underestimated the Jo-Li occupation forces on Sepulveda, a tragedy that tracked all the way back to faulty intel that the Working Group had collected. Everything here was more extreme than he’d been led to believe, but Frank had a timetable, and so Frank took chances, because he had a job to do.

And so Frank got caught.

He didn’t go down without a fight. He was pretty good at intelligence, but he was very, very good at killing. Word soon passed around Hanley that the new miner, the big stoker of a guy who seemed way too smart for this job, and way too enthusiastic about the Resistance for a new arrival, was dead, killed by the friendly neighborhood Control Battalion, but on his way down he’d cleaned out half the barracks of Control 71 in a last ditch battle in the old warehouse (the one without the grav lift). They couldn’t really discuss it too much or “she’d hear,” as they put it on Sepulveda, but eventually it got around that he’d escaped to the warehouse when two Control trucks pulled up outside his hut and the CBs started piling out, headed for his doorway. He’d high-tailed it out of there but they’d soon heatscanned him to the old warehouse, surrounded the building and went in after him.

At first a squad entered. Gunfire, more gunfire, then silence, so a platoon went in, by squads. Gunfire again, and now a request for backup on the micro, so before long an entire company of CBs was sweeping the warehouse as their numbers were reduced … one by one. Eventually the battalion commander just ordered the troopers out and the whole building blown up, and when they picked through the rubble they found him. The body was frozen to be sent back to The Rock, Jelina’s asteroid palace in the 368 Sumita System, so that maybe they could figure out who this guy really was.

Three riflethings had been left at the hut to keep the girl inside, because the CB commander had been instructed that there was a child inside that would need to be interrogated and then liquidated. “There is a human child in this dwelling,” the commander hissed slowly to the riflethings. “It may try to bolt, but don’t let it – keep it inside the dwelling and we will pick it up when we return.” But things had not gone as planned at the warehouse, and the next morning, when the battered battalion made its way back to the hut to pick the detail and the girl up, they found a very curious thing. The three Riflethings were sitting in a circle outside the front door of the hut, their backs to each other, legs radiating out. If the Control Battalion riflethings had been fully human, they might have mused that this is the way a girl might position her dolls so they all sit up on their own, supporting each other.

A few yards away, the heads of the three riflethings were in their own little pile, still in their helmets. The girl was nowhere to be found.

It's CODE TTC-1409 and is available here:
http://khurasanminiatures.tripod.com/15mmscifi.html 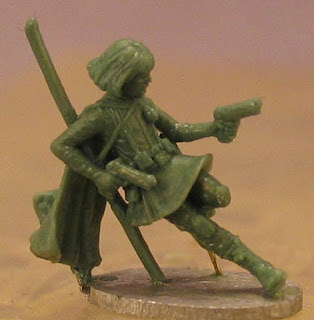 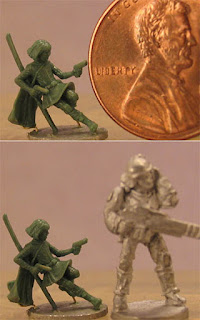