We are very pleased to release "15mm" Qajar Persians for the 19th century.  (They're really more 18mm, as is typical of Napoleonics in the market.)  Sometimes thought of as the "forgotten Napoleonics," the Qajars were regularly at war with two major players in the Napoleonic Wars, the Russians and the Ottomans, and in the first decade of the nineteenth century supplemented their masses of irregulars with a core of Western-trained regular troops.
However, beyond their tangential involvement in the Napoleonic Wars, the Qajars are first and foremost useful for the endless simmering conflicts in the "back of beyond" in the mid-nineteenth century, as the uniform did not change until at least the 1860s.  The infantry in tall sheepskin hats illustrated fending off British cavalry in the Anglo-Persian War of 1856-7 are identical in appearance to the models released today.
We are first releasing the infantry and artillery of the Qajar "new army."  Available here:
http://khurasanminiatures.tripod.com/qajar-persians.html
The new codes are: 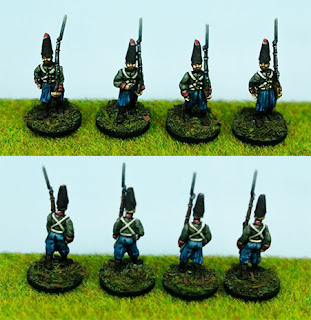 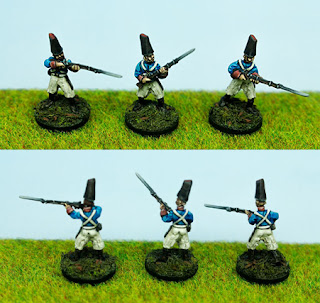 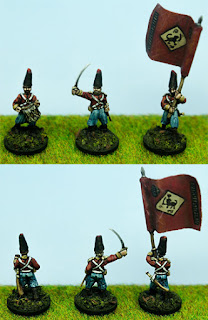 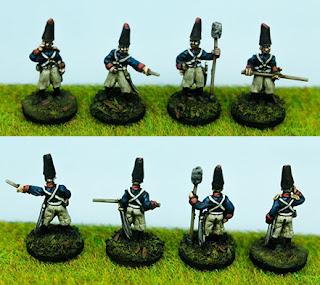 Qajar artillerists
For guns, use any British or French cannon models, perhaps with the occasional Russian gun mixed in.
The Qajar regular regiments wore uniforms but there was no set uniform colour for the entire army, and so for instance in the famous painting of the Battle of Sultanabad (in which the Persian regulars defeated a Russian force) the Persian infantry regiments are shown in a variety of different colours, although wearing uniform within the regiment.  (Our paintups show some of the uniform colours from the Sultanabad painting.)
The tall hat was sometimes this tall, sometimes a bit shorter, so we left them long on the theory that it's easier to trim them down based on individual preference than it is to build them up!
Sculpted by Mike Broadbent, painted by Knight Brush Studios.
Posted by khurasan miniatures at 10:16 AM No comments: