Here's a first look at the Ti Monhid ("Timonid") Intruder, a synthetic vehicular organism used as a personnel carrier by this hideous and violent race. 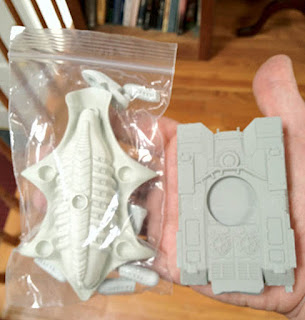 The photo shows the bagged kit (sans pewter flight stand) compared to the hull of the Siler superheavy for scale.

The image shows the belly of the Intruder, and the underside of its immensely thick and hard carapace.  The four hemispherical holes on the bottom of the carapace are for the grav chimneys, the means of propulsion of this whale-sized alien synth.  The grav chimneys also serve as landing struts when the Intruder grounds itself to disembark its awful passengers.

The hemisphere at the bottom of the belly is for the flight stand.  Gamers who have built the Mekanoid Hatchet gunship will be familiar with this system -- there is a flight stand with a ball on the top of the rod, and the ball inserts into the bottom of the ship-animal.  This permits you to depict multiple craft at varying degrees of pitch, roll and yaw, rather than being forced to have all of your craft at the same attitude.

The finished model is longer still -- the head of the Intruder can be seen in the top of the bag.  There is a separate lower jaw that can be depicted opened or closed, and inside the mouth, typical of Ti Monhid synths, there is a weapon -- a heavy phase cannon that gives the Intruder some teeth, emitting a bolt of blue energy.

At the back of the craft is an aperture from which the Ti Monhid Black Tigers or Space Demons spill -- this huge synthetic organism can carry six of the hulking Ti Monhids or a dozen Space Demons.  They emerge from the aperture coated in glistening mucus but ready and eager to fight.  The aperture has four corners which curl open to allow exit.

Humans who have the misfortune to come into contact with these craft often call them Starwhales or Drifters because of their great size and because their very sophisticated organic grav propulsion makes them appear to be swimming or floating.  The creature is capable of travelling in the void of space and is used by the Ti Monhids as a primary method of steller assault.  This in fact is the manner in which Space Demons were introduced to our dimension -- seeking to turn the tide against their superior enemies (known only as Species 84), Ti Monhid extra-dimensional outflanking forces usually enter our dimension only temporarily, but these assaults are conducted with callous disregard for safety, and occasionally the Intruders and their passengers are permanently stranded in our dimension.  These evil immigrants will seek the nearest habitable planet and drop off their deadly cargo.  The Intruder will then fight to protect the marooned passengers until it is killed or dies of starvation.  Particularly chilling is the deep base bellow these creatures emit when in battle.

I'm extremely pleased with the quality of the castings for the Intruder and I think you will be too.  This kit will be released as soon as the painter has finished it.  Stay tuned for details.
Posted by khurasan miniatures at 9:55 AM 1 comment:

The Federal Army's M3918 Stoat is a multi-purpose light armoured utility vehicle that is most commonly deployed as a HQ vehicle but is also used for reconnaissance and patrol.  ﻿ 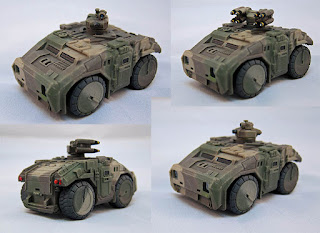 The vehicle is very fast and is proof against small arms; whilst it can also defeat certain light armour piercing weapons  it is not primed for heavy combat.  Often a command team is mounted in a Stoat in order to keep up with the troops.  The vehicle can also be seen fulfilling a light attack function, with a platoon of four Stoats on the attack, two with the automated minigun turret and the other two mounting a battery of eight Hunter-Killer Missiles.

The Stoat was designed by Steven Tyler.  It comes in seven pieces, a resin hull, two pewter weapons choices (minigun turret or missile rack) and four pewter wheels.  We like the pewter wheels as they give the vehicle some heft and "staydownability,"and the pins for the wheels are just long enough that you can pivot the front wheels a bit if you like to portray the vehicle turning.

The Stoat was designed to go with the Caiman, the upcoming Exterminator APC, as a lighter HMMWV version of that big armoured vehicle, but although it was designed and printed four months after the Caiman, ironically it is being released first!  This is the 15mm scale version of the vehicle and will be released the week of March 19, 2012.  I will announce availability on The Miniatures Page. 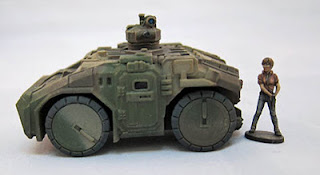