The Stikks do not speak often, but when they do, they speak all at once, together.

One Stikk will begin rubbing its mouth parts together, letting out a rhythmic chirp, and all at once every other creature in the pod will join in, each predicting the patterns and rhythms of the others, so that they sing as one, except occasionally one Stikk will interject a chord soaring higher over the steady song, which may have some deep significance, or may just be for the sake of the music. We still have not been able to decipher their speech patterns.

Although they are properly called the Entomals, "Stikks" became the popular name for these beings in the Federation soon after first contact, apparently because the Federal troops who first fought them, FLA (former Latin America) regiments of the Federal Army, found them to resemble stick insects. There is indeed some superficial resemblance around the head, but as those Federal soldiers could attest, these are not sluggish or slow moving life forms. In life and in war, they are nimble and aggressive, especially when together in large numbers. 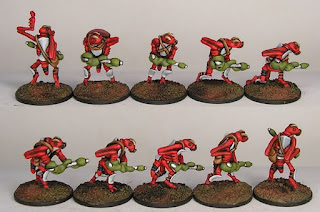 Like the infantry forces of other sentients, the Stikk infantry are the basis of their military. The basic unit is called by the Federal military a pod, made up of three triads and a leader. Each triad has two Stikk gunbugs and a heavy gunbug. All Stikk soldiers wear a reflective armour array that protects the torso and the lower leg from laser weapons and provides some residual protection against other attacks, relying on their tough exoskeleton for further defence.

Each Stikk pod has attached to it a doublebarrelled heavy gun team, which like all infantry weapons is of the gauss type, and a mortar team, which provides indirect fire to the pod, firing an electroshock round. Both gunteams are commanded by another leader who stays in close contact with the pod leader, and serves as a second in command should the pod leader become a casualty. 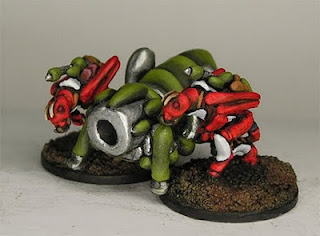 Available as hive-level support is the Crikket Infantry Cannon, which will "walk" when activated by its crew and fires either an armour piercing or high explosive round. This and many other Stikk weapons systems shows disturbing signs of biological life and is believed to be a synthetic bioweapon, these being collectively called "Synths" by Federal soldiers. When the crew are separated from the Crikket it will go to ground or will amble toward the nearest concentration of Stikk soldiers. It will not fire on the enemy unless crewed. All the crewstikks need do is gently nudge it and it will walk where they direct. It has proven to be an extremely useful infantry support weapon.

Providing potent aerial fire support for the Stikk forces is the Odonate light gunship, popularly called the "Dragonfly" for obvious reasons, another suspected "Synth," although there are unconfirmed reports of Stikk crew evacuating downed gunships. It is small but well armed with a twin heavy gauss cannon, and both anti-personnel rockets and anti-tank missiles. It is arguably the most nimble gunship in federal space, its "wings" manuevering it in directions that would be impossible for Federal flyers, and is exceptionally resilient for its size. These craft operate in close cooperation with the infantry pods.

The Stikks have also been reported to use heavy armoured vehicles in combat and for transport, but there have not been confirmations of those yet. These vehicles are said to be large, modular, and legged. Reports of Stikk heavy shock infantry of a completely different and much larger species, operating in small groups in close coordination with the infantry pods, are also unconfirmed, but are being investigated.

The Stikks were first encountered in the War of Vasq Separation, when the Separatists hired several Stikk battalions to assist their armed resistance to the dominant culture, the Torans, who had requested Federal intervention. The encounter with the Stikks during the first phase of combat operations took the local Federal and Toran government forces completely by surprise, and it is still not known how the Separatists hired the Stikks or introduced them to the theater without discovery by Federal Intelligence. The Stikks fought the loyalist and Federal forces to a standstill, prompting the local Federal joint-services commander to call for a ceasefire.

Reports soon reached Federal HQ that the Stikks had not been paid and had promptly departed, leading to immediate resumption of hostilities upon the expiration of the ceasefire, the Separatists being defeated in weeks.

The Stikks have subsequently been encountered on several occasions serving as mercenaries on the frontier or even in some of the more autonomous Freeholds. Their own language is completely indecipherable, but they have mastered Federal Standard and are able to understand it, and to speak it as well, approximating the sounds by rubbing their mouth parts together. This form of communication is a slow process but in the end they are able to make themselves understood.

Some Stikk soldiers wear backpacks and these are closely guarded. It is theorized that these contain concentrations of pheromones which permit the individual pods to stay in close ocntact with each other and their hive-level support. Each pod has one pack, worn by the senior heavy gunner in the first triad. Many members of the pod heavy weapons team also wear these backpacks.

The Stikks are virtually impossible to break in combat when their pod is intact, but they seem to key closely into each other, as when the casualties rack up they lose their fanaticism and when only a few Stikks are together it is easy to chase them off, easier than would be the case with other opposing forces. As such it seems likely that they have some form of hive or herd mentality.

The Stikks were sculpted in 15mm scale by Mike Lovejoy, and were painted by Chris Yaro. The infantry pod has ten models, each a unique sculpt. The heavy weapons team set has two different weapons and five crew in three different poses. The Crikket gun is pewter and has two different crewmen. The Odonate gunship is also solid pewter and does not supply the flight stand. Although it should be noted that the craft has landing skids so can be placed on the table, as it closely resembles a dragonfly we assume gamers will definitely want to depict it flying! Chris has used an acrylic flight rod and a plastic base.

The Stikks will be released very shortly. Stay tuned!
Posted by khurasan miniatures at 6:09 PM 5 comments: