Pleased to be able to show off the first resin and pewter castings of the M1A2 SEP that we will be releasing in 15mm scale.  We're very happy with the results, and this very important modern period tank is also quite a handsome vehicle. 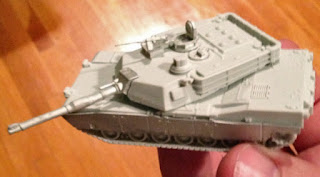 The kit is resin but has a pewter cannon, machine gun, hatches (which can be added closed or open), TC's cupola, and side skirts. 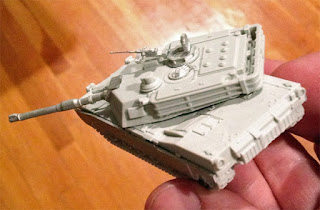 You may wonder why the side skirts are separate -- first of all, having them that way makes them look more realistic.  But equally importantly, it allows us to provide you with two vehicle upgrade sets. 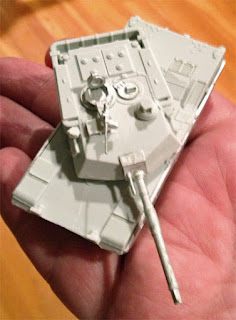 After the base M1A2 SEP is released, the urban warfare versions of the vehicle will be made available as well -- both TUSK 1 and TUSK 2.  Having the side skirts separate made that feasible for us. 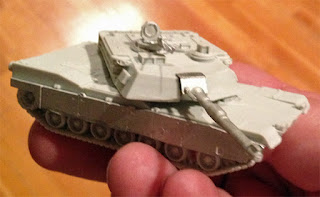 Stay tuned for details -- the kit should be available once I get it painted up for display, or when I get the resin and pewter castings, whichever comes first!  One never knows how the pieces will all end up falling together in this crazy business.

Some notes on 15mm DOE assembly 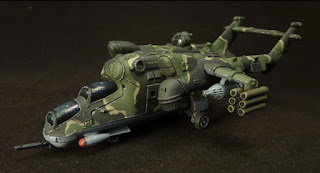 Our new DOE Gunship is the VTOL blunt instrument used by Nova Respublik commanders for sudden application of overwhelming firepower, and brings with it the ability to insert elite troops right into the action. The kit is impressive, the resin casting being high quality, and despite the large number of pieces it goes together fairly expeditiously.


A few hints on construction would be in order for when you have your DOE in hand. Just three really, which have come up due to the different degrees of shrinkage that resin and pewter pieces go through in the mouldmaking process. 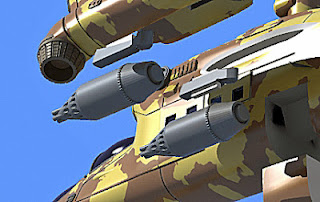 The first hints involve the pylons that hold the plasma rocket pods in place. There are two types of pylon -- one that holds the outer rockets in place, and another that holds the inner rockets in.  As you'll see, the outer rocket pylon has a more irregular shape to fit the rear contours of the wing's trailing edge.  The inner pylon is situated further into the middle of the wing so it has a straighter surface.  One recommendation is to test fit them first, as the tabs on the pylons are a little too big for the slots on the wings and rocket pods -- you can either whittle down the tabs or open up the slots a little.  Pretty simple really.  The other recommendation is to glue the pylon to the rocket pod first, then you can glue the whole thing to the gunship's wing.  It's easier to get the little pylon tab into the wing slot that way, as you can just hold the rocket pod.
One concern might be the strength of the pylons for extended gameplay. The pylons look great, and should be fine if you tend to play local or at your home, but if you are rough with your models, and/or travel a lot, you may want to dispense with the pylons altogether and just glue the pods directly to the wings!  That looks pretty good too.

The second hint concerns the sensor arrays that look a bit like teardrops and attach to either side of the front of the DOE (shown above). The tabs on the gunship’s cheeks are just a bit too large to fit into the slots on the sensors, so will require a little whittling as well.   Not much though as you'll see. 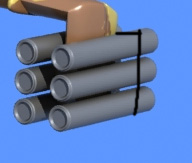 Finally we have the back of the super-heavy anti-material missile racks -- mech killers!  The caster eventually decided it was best to cut the rear off as otherwise lots of air bubbles would have developed on the piece due to the challenge that this extremely complex shape presented.  So in the above image you'll see a line indicating roughly where the cut is.  It's pretty obvious actually where the six tube endings, all one piece, go.

That’s really it! Enjoy your red menace ... it certainly was a long time coming!
Posted by khurasan miniatures at 7:55 PM 1 comment: