Very pleased to post the first photo of the DOE VTOL gunship, scourge of Federal troops and especially armour, and the instrument of destruction of the Neo-Mongol hordes by the Raathist Republic of Kym.  This model has had a long and storied path to this point, but now it's just two rocket pods away from being painted, and the caster assures me that the production castings will ship Friday! 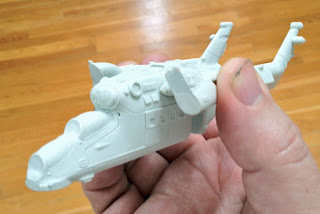 The doe is armed with a dozen heavy anti-material missles which it carries in two pods on the outer wingtips, four smartrocket pods, and a three-barreled gatling cannon in the nose.  It's a terror of the 26th century skies.

Stay tuned on this hol-chan for more details, comrades!
Posted by khurasan miniatures at 3:56 PM 7 comments: