Whether you like 15mm sci fi or high adventure, there's something fluffy for you at Khurasan Miniatures.

First up we have updated our Mystri Island range with some hominids who apparently found a coke bottle, or touched a black rectangle, or whatever, and now realise that the nearby bone bed is a splendid arsenal! Ten models in five subhuman poses.

They are available here:
Mystri Island 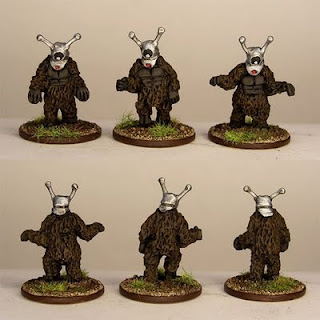 Pulp sci fi hasn't been neglected on the rug-with-legs front, as the Furrobots have invaded, the leader Spar Tan and his two minions (insert ancient civilization references here) arriving in a flurry of bubbles to wipe out mankind, but hopefully not the cutest girls.

The Furrobots are available here:
Planet 15
Posted by khurasan miniatures at 8:55 AM 7 comments: 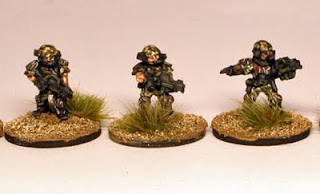 The Federal Defence Forces are static army units which defend far-flung worlds from alien attack or infestation, and preserve government control on planets subject to unrest or separatism. They wear some body armour, though less extensive than in the first-line Federal Army divisions, and it is of simpler design and tech. Their weapons are the older rifles firing caseless CPR but each one mounts a grenade launcher and this affords the FDF troops with considerable close range firepower.

Due to infestation either by Space Demons or Parasachnids, units of the FDF stationed in infested zones have become proficient at eradicating such "xeno-hazards." These units are called, with some dark humour, "Exterminators," and they are the only units of the FDF to be actively posted to foreign worlds, but only long enough to put in place a programme of eradication (POE) so that the local forces can then maintain the xeno-hazard.

One typical unit is the 1/2/469FDF (first battalion, second division, 469th FDF Division), a unit raised on Earth, in the FUSA (Former United States of America). Although raised in the Mid-West of the FUSA, the unit has been stationed for some years in the Florida Quarantine Zone, which was rendered uninhabitable by Parasachnid infestation after the First Pelagic War. It being eventually recognised that these infested zones would be difficult if not impossible to fully cleanse, the emphasis is instead placed on population control, planned and executed by the FDF division in the zone, in this case the 469th.

The most effective bug-hunting battalion in the division is the first battalion of the second brigade, a designated Exterminator unit self-dubbed the "Pointy Toed Shoes" because there is no place the bugs can hide once the second battalion is gunning for them.

Because of their Exterminator status the PTS are periodically deployed to other worlds as well, and they were eventually called in to implement a POE for the Parasachnid population after the Sepulvedan War was over. During this time they also had many battles with holdover Control Battalion Death Squads surviving in remoter outposts of the planet.

We are pleased to sneak preview the first three of nine poses of 15mm Exterminators which will be released shortly. The pack will be a typical squad, split into two four-soldier fireteams and led by a sergeant. Each fireteam will have a MLMG (mobile light machine gunner); one team has three riflemen as support for the MLMG, the other team having two riflemen and a flamethrower operator. These should be released in a few weeks.
Posted by khurasan miniatures at 8:58 AM 16 comments: