We've had Resistance crew made as well for the weapon.

Coming later this year, stay tuned for details.
Posted by khurasan miniatures at 8:22 AM 4 comments: 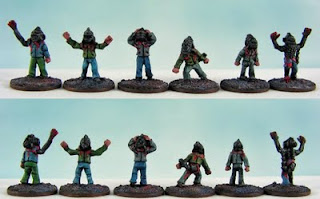 There are many horrible things about space demons, but their method of reproduction is perhaps the most horrible of all.

Space demon queens deliver live nymphs and these immediately scramble about looking for a host. (This task is often made easier for the nymphs by adult demons, who drag hosts off and imprison them in a chamber near the queen, to supply to emerging nymphs.) When the nymph finds a suitable host, it will hop onto it and swallow its head into their body via a huge maw on the bottom of the nymph's body, sinking their scythe-legs into the shoulders of the host and a piercer rod through the skull and into the brain of the host. Removal of this rod results in guaranteed 100% fatality to the host, so once hosts are infected there is no saving them.

The nymph thereby takes over the body of the host, and begins pumping in hormones and enzymes which rapidly transform the body of the host at a molecular level, until about two weeks later the host is a full-fledged space demon. This process tends to spread from the neck down to the legs, but this is not always the case, and for instance one arm of the host may have transformed into a space demon arm before the other has.

The host's brain is the last part to be transformed in order to continue to support the still human bits of the transforming creature. This is a painful process for the host, to put it mildly, whose muffled screams of anguish have led to nymph hosts being termed howlers or shriekers.

This explains why space demon nymphs appear to be assault demon heads with spindly legs, as that is essentially what nymphs are.

Even while transforming, the nymph host can be a formidable opponent, as it is "piloted" by the nymph which will use the host's limbs to flail at enemies of the hive with that terrifying strength that the human body can demonstrate when it is not inhibited by fear of self-injury. Nymph hosts can sometimes be found shambling about, shreiking or moaning, in zones infested by space demons, and make frightening foes indeed if they can get into close combat, made only worse by their piteous shrieks as they flail away.

The models are available now, code TTC-908 (the newest code in the Space Demon range). Click on the above image to see it larger.

Posted by khurasan miniatures at 11:46 AM 2 comments: