We are in the process of rolling out our 15mm Yom Kippur War range of vehicles and infantry, and just in time for that, the new Youtube "modeldads" review vlog has featured our currently-available T-62, the very-soon-to-be-released T-55, and the Chinese knockoff of the T-54, the Type 59 (a tank that has fought in countless wars in the post-war period).

Here's the link--we are glad the modeldads team liked the models overall!

Posted by khurasan miniatures at 8:30 PM No comments:

Biology of the Post-Event World: the Skunkeater 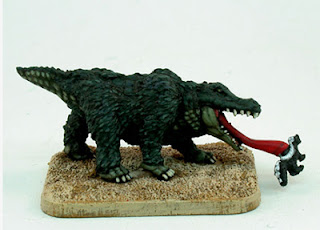 The name "Skunkeater" is testament to the animal's favourite food, for skunks survived the Event to scratch out a living amidst the ruins. True to its name, the Skunkeater devours these small creatures and seems to store their noxious musk in a gland at the base of the tail.  When alarmed or, at times, when hunting, a Skunkeater will emit an atrocious odour similar to that of twenty or thirty skunks spraying in unison. This assault on the senses is more than most humans can bear, and it is not uncommon for people trying to defend themselves against Skunkeater attack to simply collapse, retching uncontrollably, only to be caught and eaten by the Skunkeater.

Much larger predators, such as the Mojave Pilgrim, the Inland Empire Stiltwalker and the Great Lakes Slug, are generally deterred by the putrid odour of the Skunkeater -- perhaps the primary purpose of the skunkeater's musk. To maintain this defence the Skunkeater must spend a great deal of time hunting down skunks, which is it able to catch by means of its very long, sticky tongue. It is able to extend this tongue out for some distance and with reasonable accuracy like the now-extinct Old World Chameleon.

After Radi-ants, Skunkeaters pose arguably the greatest animal threat to survivors. They are known to take up residence in areas where they have located survivors and will usually not depart until it has been eaten clean. Even if its musk gland is depleted the Skunkeater is vastly more powerful than a human and can rip even a well-armed ganger limb from limb. Skunkeaters are heavily protected by scales, and although they are not immune to firearms or cruder weapons, they have proven remarkably difficult to kill, often being shot eight or nine times before succumbing to their wounds. Survivors are advised to avoid these animals at all costs. Even if you have firearms, it's probably better to abandon your shelter and escape as best you can if it attracts the attention of a skunkeater. 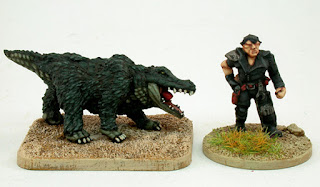 Our reconstruction of the skunkeater in 15mm scale brings this terror of the post-Event world to your tabletop. The model is provided with several optional pieces -- a jaw with tongue retracted, another with tongue partially extended, and even a skunk! The skunk may be shown hustling away from the skunkeater or it may be stuck on the predator's tongue.