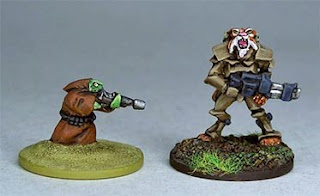 Very pleased to preview the Chewks, sand-shrimp desert aliens in 15mm scale. Click on the images to see full size. The Chewks are the native sentient life form on Sepulveda 7. The first pic shows their size compared to a popular 15mm sci fi alien choice, the human-size Felids. Sure, the Chewk is a wee fella, but he has the heart of a lion (a very small lion), and his bolt action plasma rifle packs a mean punch!

Also available will be the mighty Chewk Drill Tank, a flat-headed monstrosity in which entire tribes of Chewks travel deep under the desert sands -- only to erupt from nowhere and spill out, raining mayhem on unlucky travellers in the Sepulvedan deserts. It is a resin kit, posed emerging from the sand, with doors that can be posed open so your Chewk tribe can run out shouting oaths in Chewkish. And there's also a field piece, the chewkannon, which comes with pieces to either be mounted on a boom arm on the Drilltank, or on a mobile field carriage, and this even includes the chewkamel, a giant no-see-um beast of burden that pulls the chewkannon carriage.

I've got multiple vehicle kits to release this week, and the Mekanoids next, so look for the Chewks the week after that.

To read more about the Chewks, read this blog entry.
Posted by khurasan miniatures at 6:41 PM 5 comments: