TOP SECRET
Federal Intel has determined that at least one squad of Myzontid Rangers has been working on Sepulveda 7 for several weeks. These collect intelligence for the Pelagic Dominate's Hydrofarming Council, the main strategy-planning body of the Dominate, and their presence usually indicates preparations for an invasion.

These vicious, silent killers are feared and hated by the Karkarines who make up the bulk of the Pelagic forces, although to human eyes they appear similar at first because they wear the same cut of uniform and use many of the same weapons. On closer inspection it is evident that they are a very different species, with small beady eyes and a mouth permanently agape and lined with teeth. Their SCOBA (Self-Contained Out-of-water Breathing Apparatus) gear is also configured differently, as the Myzontids have a single water intake hole on top of their heads, rather than taking water in through their mouths. This is so that they can suck the blood and organs out of their prey for an extended period of time and still take in water for breathing.

Myzontids often operate far from the main Pelagic forces, and as such have a heavier squad weapon, a potent smart missile launcher. In line with their missions, they are also accompanied by a sniper. These are uncannily accurate and patient, more so than human snipers.

Because Myzontids are at the leading edge of Pelagic invasions, they often interact closely with the bioweapons that are dropped on the target planet, the Parasachnids and Mantis Stalkers. In order to avoid attack from these animals, the Myzontids are generally equipped with ento-repellant, somewhat of a misnomer as it does not repel entomalians so much as it obscures the signature of the Myzontid as potential prey, rendering him essentially invisible to the creatures. (It has been observed in previous combats that the failure rate of the ento-repellants appears to be fairly high with respect to Mantis Stalkers, which appear to be capable of sensing the Myzontids despite the ento-repellant.)

The intercepted transmission indicates that the aquans are probing the level of development of the feral Parasachnids on Sepulveda, which is one of the hallmarks of Parasachnid invasion plans. The transmission was intercepted intact and clearly shows two aqua-casts of an Ogre Beetle on Sepulveda 7, possibly two images of the same creature, one from a slight height, the other of the creature actually passing over the Ranger as he captured the image. 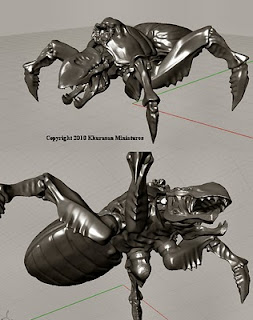 The reader is reminded that Federal breakthroughs in Pelagic transmission-interception and deciphering are of the highest sensitivity and are not to be discussed with anyone of lower clearance. As such, the presence of Ogre Beetles on Sepulveda 7 is not to be communicated to Federal forces operating covertly on Sepulvda, or to the Resistance of that planet. Failure to comply is classified as Statutory Treason.
Posted by khurasan miniatures at 7:21 AM No comments:

The Biology of Sepulveda 7: Part 4, feral Parasachnids and the "Ogre-Beetle"

Parasachnids have gone feral since the previous probing attack on that planet, in which the aquans launched, as usual, hundreds of insertion pods (called "bug dumpers" or "cheese carts" by the troops) before their first forces made planetfall. Most of the inserted creatures were killed by smart missiles while descending, by the impact of their pods, or by defending forces on the ground, but just the surviving handful permitted this remarkable species to go feral on the planet. They have now become a menace, particularly in the desert and around the angravite seas.
On Parasag, their native world, the Parasachnids became the dominant species by means of extreme survivability of the species, no matter how small their initial numbers. Each one carries one egg in its abdomen, which, if no queen is nearby, will be laid and tended, hatching in a few days time a "queenling," a larva that can become a queen. These are raised by the creature that laid the egg until old enough to walk freely, at which time they hunt out and fight all nearby queenlings until the strongest remains. This creature becomes the queen of a new hive. A few parasachnids carry a single drone egg rather than a queenling, and these similarly fight for dominance. The surviving drone seeds the surviving queenling, and is then consumed by her.
Current thought among Federal xeno-entomologists is that, after the colony reaches a thousand surviving members, the queen lays one ogre-beetle egg. The ogre beetle reaches lengths of over 7 metres and obviously requires a great deal of resources to nuture it to adulthood, and so it is that their eggs are apparently not laid until the hive can support them properly. These fearsome creatures are not well known to Federal scientists; we have heard that they often travel by tunneling and have the ability to generate some form of extremely potent heat attack which can be sprayed from a spout located on their thoraxes. It is said that the parasachnid feeder legs, usually located on the thorax, have evolved, in the Ogre-Beetle, into a form of biological "gun door" covering up this fire-spout until the moment of fire. It is not known how an animal can generate flame in this manner, but several hypotheses have been proposed. Before they were exterminated by a Parasachnid infestation, the anarchist colonists on Chout referred to these creatures as "dragon bugs." 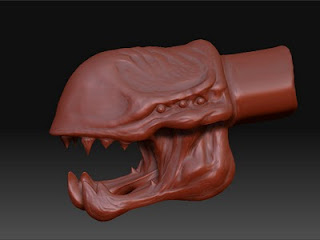 Artist's conception of an ogre-beetle head, created from the transmissions from Chout. It is not known if this is completely accurate.

It is possible that, to date, no hive of Parasachnids on Sepulveda 7 has reached 1,000 members, as there are no known eyewitness accounts of the presence of Ogre-Beetles. Some Federal biologists believe this is because the native predators, the Sponks, are so adept at catching Parasachnids from their underground burrows, which Sponks will often locate near Parasachnid food sources or nests. However, circumstancial evidence is growing of the presence of Ogre-Beetles, as on more than one occasion convoys of miners' trucks headed across country have been lost, the remnants being badly charred. Some theorize that this is the work of Garn strike forces working for the Jo-el Freehold, as the miners' corpses and the precious angravium ore were missing, and it is known that the Garn have a strong preference for immolating human targets, but others feel that the nearly planetwide presence of Parasachnids makes Ogre-Beetle establishment nearly inevitable.

Federal scientists will continue to monitor the situation in conjunction with local reports, however direct Federal study on Sepulveda 7 is resisted by the Jo-el Freehold, in violation of the Federal Freehold Agreement.
Posted by khurasan miniatures at 8:06 AM No comments: