Here are previews of our upcoming 15mm scale Sci Fi interiors. They are meant to allow the gamer to represent the interior of a lab where something has gone terribly wrong, the interior of a starship that's been boarded by enemy troops or intruded upon by some horrifying stalker, the underground passageways of a massive defence complex, or whatever else strikes your fancy. 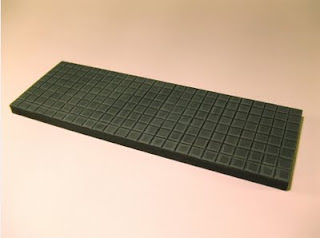 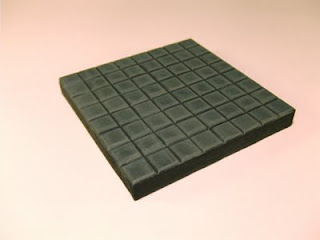 Next up we have the smaller corridor, a corner piece or small room, 50mm (2") square. 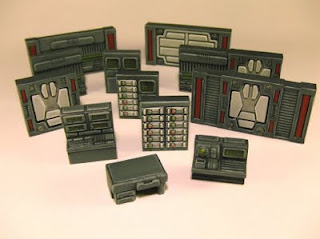 To clutter up the corridors and to place barriers between them we have consoles/computers/etc, a drab looking desk (over which a guard may be draped, dead, or a desk with a half-eaten doughnut may be placed), and doors and bulkheads of varying sizes to split up your battlescape into fighting zones. 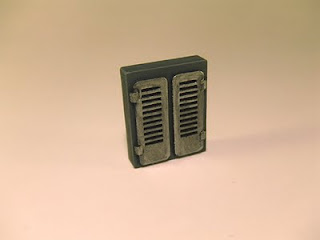 The console/computer pieces are meant to be two-sided, and have on their rear access doors such as those shown above. 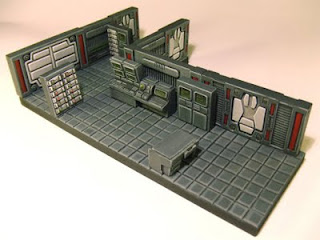 Martin of Fire Broadside has done a splendid job painting these up in an ominous, businesslike fashion, and he took it upon himself to array the pieces together to show the kind of look the gamer can achieve.

One note, however. These pieces are not puzzle-like interlocking sets and were not designed to have curtain walls along the sides. The idea was that the gamer would build angular snaking sections which can be placed together in various configurations, but they do not interlock. Curtain walls along the sides, in our experience, tend to get in the way of model placement and a clear view of the action, so the vertical dividers, mostly doors but also including bulkheads without doors, are meant to create dead ends or dividers.

John Bear Ross has done an excellent job putting these together in the look of many popular sci fi realizations of interior battlescapes which we may all be familiar with. And there's more coming! A large round room (yes, round!) to represent a central test chamber, the bridge of a small ship, etc.; a spaceship or test chamber large control seat with readout console; a sleeper chamber for cryogenic preservation, an engine, generator, or other large piece of machinery, and a pillar to create the look of a support, or to put together an elevator, etc. All of these will be shown when they are ready for sale. The first pieces should be released soon. Thanks John and Martin! If gamers like these we will certainly make more.
Posted by khurasan miniatures at 6:24 PM 8 comments: 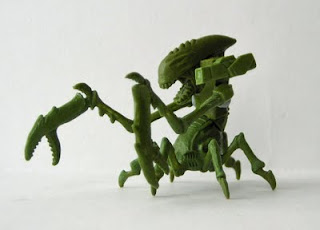 Above is an image of a Vulk missileman from the JTFB, the Jasmine Throne Foreign Battalions.

The so-called Kingdom of the Jasmine Throne is a freehold in Federation space inhabited largely by humans, settlers primarily from the former Terran Central Asia, and their young queen, Roxann Diamunda, is a just and humane ruler. However, there has always been a great deal of intrigue, rivalry and dissension in the military and ruling caste of the Jasmine Throne, and assassinations and military coups were all too common in the past. This led the queen's great grandfather, the mighty Shapur the Wise, to raise four battalions of aliens to serve as his bodyguard, simply titled the Foreign Battalions.

The force has gradually been expanded and there now exist twelve battalions of JTFB as well as four armoured battalions. Each infantry squad member and vehicle crewman is a different alien species to prevent collusion in the ranks.

This system has worked well and there have been no successful coups since Shapur's time.

Aliens come from around the galaxy to serve in the JTFB, for many different motives. They may all look different but they wear uniform armour (modified to suit varying body shapes, of course) and use weapons of standard design (similarly modified by your friends at Mercanto-Dett Military Solutions). All must know at least rudimentary words in Federal Standard in order to obey simple commands. The training regimen is gruelling and many candidates fail, but those who succeed are members of an elite, hallowed formation indeed.In fact, it was Roxann's decision to send six battalions of the JTFB to Molch that turned the tide in the Molch/Vornid War.

Their battle cry is "to the queen!" which is a reminder that their most important role is to protect the queen and rally to her in case of a coup attempt.

All JTFB members are called "men" even though none are human and some are female. Vulk are some of the larger aliens serving in the JTFB and as such are often tasked as the heavy missileman in Fireteam A in a squad. Vulk are huge, ferocious carnivores and must undergo considerable conditioning to work with other species, but these dauntless warriors invariably earn the respect and sometimes even affection of their teammates for their coolness and bravery under fire. The huge Slaker cannons that native Vulk warriors employ are of no use to them in the JTFB as a logistical matter, and they are equipped with a standard heavy smart missile launcher, which is mounted on their armour and aimed and fired by a pressure point implanted in the Vulk's mouth.

This is the first sneak preview of our upcoming JTFB line, which will be made up entirely of unique aliens, each in standard armour and using standard weapons. They use MDMS vehicles, the Goanna/Taipan AFV and Canetoad APC, and there will be JTFB crew halves for those vehicles as well. We may even commission Roxann and her Neo-Sassanid legions as a future human faction (most of the army of the Jasmine Throne is human, only the queen's bodyguard being alien). Stay tuned for more details on the JTFB.
Posted by khurasan miniatures at 9:46 AM 9 comments: