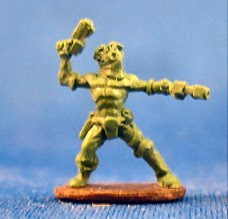 Little was left of his mind but the desire to better his foes with the pistol, and the ability to do so. On the road gang he had had many opportunities to do just this. Like the gunfighters of the Old West, he covered his face, although whether this was to shield his identity or to cover some hideous wound or deformity, no one could truly say. Some day he would be killed, and perhaps then his mask would be lifted by the victor, but until then, the mystery would linger.

His boss had taken many slaves and had plundered many caches because of his skills. He saw little of this loot except scraps of machine tools which he worked into his latest pistol. Great was his hunger for a better life-taker.

And behind him in the gang was a rogue's gallery of other outlaws, ready to descend on the last civilized settlements and bring to them what the apocalypse had brought to civilization itself.
Posted by khurasan miniatures at 8:47 AM