Well, it's 2009 and I've got a bunch of new projects coming up, both historical and sci fi. I got into sci fi on a lark last year but it proved so popular, and was so much fun to do, that it's now effectively a co-equal of my historical projects.

For historical fans, I've got many 15mm projects coming. Today's post highlights one of them:

Early Swiss:
These are finished, and will be suitable for 1291 to around 1420 or so. They are primarily meant for the period between Laupen and Sempach, for instance the knightly commander being in South German style armour from around 1350-70. (He's one of two leaders that were made, the other being a petty noble halberdier in the spirit of Arnold v. Winkelreid.)

The army centers around six halberdier poses, including two throwing rocks. These allow depiction of returning foragers who are pelting the enemy with rocks as represented in some games, although personally I think this is a bit misplaced, as this was not some extraordinary tactic just improvised by foragers! It was a standard tactic of all early Swiss armies, when most men carried halberds, to go into battle with a handful of good stones (mountaineers have their pick of those) and to stone the enemy during the approach. This was no longer practical when the army shifted emphasis to the pike as its weapon to front the main squares, but in the early battles there are many accounts of foes, both men or horses, being stunned or even killed by these stones. I would mix the stone-throwing halberdiers right in with the combat columns. 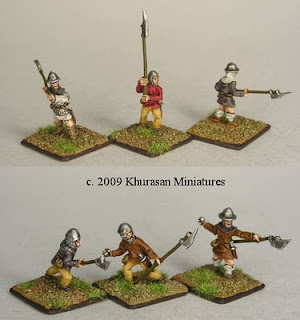 Also in the army are three crossbow poses, with pavises for these available separately. Most army lists allow only skirmishing crossbowmen due to the fact that in later battles the crossbowmen (and handgunners) would screen the pike columns, but again I'm not sure this is strictly true in the early period, when pavises were more frequently used and letzinen were defended. This is another example of the early, halberd-based army being shaped around the later pike-rush army. Be that as it may, if your game does not allow the crossbowmen to use their pavises these devices will make great adornment of your baggage or camp stands! In the Middle Ages armies often ringed their camp with propped-up pavises.

To supplement the halberdiers we also have two pikemen, for the Swiss always used spears in addition to halberds, right from the start, but it was clearly subordinate to the halberd. Only two poses? Yes, even once the game permits the use of the pike as a formation's armament, the halberd clearly was the predominant weapon in terms of numbers, so your pike elements should probably have one (or even two) halberds mixed in. For instance, I'd suggest that the early pike units in Field of Glory, which I believe are supposed to represent some of the attack columns of the more urbanized cantons, should have front rank elements that are three pikes and a halberd, then rear ranks that have just one pikeman on the outside of the element, with three halberdiers on the element.

The pikemen have the shorter pike used in the early period, about ten to twelve feet long. The huge pikes of the Italian wars were not adopted until the rise of pike-armed rivals such as the landsknechts in the very late 15th century. For the 14th and most of the 15th century, a short pike was still longer than what most enemies used.

Finally we have four command models:

a) a hornblower with the Uri cow horns and ears -- it's easier to shave these off a non-Uri man than it is to add them to an Uri man, if you get my drift!

b) a standardbearer who might at first be mistaken for a pikeman, but his standardpole is a little shorter and much thicker than the pikes

c) a noble commander in knightly armour, the only man in the army with a heater shield!

d) a petty noble halberdier, meant to represent the mythical Arnold v. Winkelried but perfectly appropriate as a veteran commander of lower aristocratic origin -- he's in a slightly better armour than the other halberdiers, but not knightly panoply

What, no drummer? Yes a good question, but it's not been determined exactly when the drum became a key element of Swiss warfare. I personally believe that it took its special role when the pike became the predominant tactical arm, as it was very difficult to maneuver the big pike squares, and so the drum was used as a way to coordinate the movements of each indvidual pikeman. I believe the big horn, which has a huge and terrifying boom (think the horn at Helm's Deep in The Lord of the Rings), is better representative as the instrument of the early Swiss.

Another dilemma was how to represent the models' appearance, as even amongst the modestly equipped peasant Swiss, fashions did change a bit as the 14th century wore on. Not so much in dress, but definitely in helmets. In the earliest armies most men would have simple skull caps, either cloth, leather or metal, and of course the ubiquitous war hat, the open-faced brimmed metal helmet that the Swiss wore right up to the beginning of the 16th century. But as the 14th century wore on, the bascinet came increasingly into use by the Swiss, as it became fashionable in Europe by about the middle 14th century. So how to depict the models?

We decided in the end to make the models with the universal skull caps and "war hats," and these are what are in the basic packs. Then, we chose five of the models, more or less at random, and had them converted to wear the bascinet. We will be selling this as a separate "booster" pack with a mix of halberdiers, pikemen, crossbow and command in the bascinet, which gamers who want to do mid-late 14th century armies can mix in with the standard packs. It resulted in a slightly greater expense but hopefully this will allow all gamers to make the army as it should look -- armies from 1291 to 1340 or so with just the standard packs, and for later armies with the standard packs plus a mixture of the bascinet men from the booster pack.

You may notice in the photo above that some of the men are depicted with their hose rolled down -- this was apparently a common practice in the Middle Ages, to allow more motion of the legs and to cool off. At least one description of the battle of Agincourt describes the English as having done just this. (See, for instance, WB Kerr's article "The English Soldier in the Campaign of Agincourt," in The Journal of the American Military Institute, Vol 4, No. 4, 1940.) In fact it was such a common practice that the French word avalez was used specifically to describe it.

These will be released in the second week of January, if all goes well. Look for them on the website! And coming a bit later (perhaps a month later or so) will be two additional pieces -- a 40mm length of stone wall for the Letzinen, and a generic later medieval tent for commoners. Letzinen were an important part of Swiss battlefield tactics before they began expanding at the expense of their neighbors. The tent is made based on depictions of the small tents that commoners usually lived when they went to war during the later Middle Ages and Renaissance (1300-1550 or so).
Posted by khurasan miniatures at 7:35 AM