The Biology of Sepulveda 7: Part 11, the Chewks

The Chewks are currently being sculpted to recreate the appearance of these desert nomads in the Sepulveda 7 campaign. Wandering the equatorial deserts in their immense underground drillships, they will attack any who enter their domain, seeking tribute for passage, or simply taking what they wish from those who dare upset the great stillness of the desert. 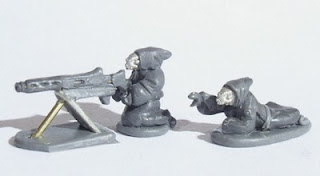 These are the first of two teams of Chewkgunners. (This team is a WIP.) The Chewkgun is the main infantry arm of the Chewks, a machinegun cognate which sprays the enemy with deadly fusion balls at a high rate of fire. This has a particularly lethal effect on armoured targets, who lose their armour advantage to the fusion ammunition of all Chewk weaponry.

Like most indigenous life forms on Sepulveda 7, the chewks are xenocrustaceans. Quite small by human measure, the Chewks have "the heart of the Sponk beating within their bodies," as the saying goes amongst the human population. Standing roughly four feet tall (so 12mm tall in 15mm scale), the Chewks cannot shoulder weapons as large as can humans, but it is of little matter, for they have developed a round of ammo to penetrate the hard shells possessed by so many of the creatures on Sepulveda 7, and this fusion ammunition levels the playing field. Even the rifle of the infantrychewk fires a fusion round, although it must be loaded into the muzzle and then detonated by a bolt-action mechanism in the breech.

The chewk is undeniably at a disadvantge in close combat with a human, but to some extent it makes up for this due to its hard shell and sharp pincers, and irritating failure to be intimidated by any creature or any weapon. Nonetheless, it is in close combat that the Chewks are most often defeated, and when obviously bested they will at times simply leap upon the sand and burrow in, escaping with startling rapidity unless tightly grasped. This same uncanny sandburrowing ability is of enormous assistance to them when they are under bombardment.

We are making 29 unique sculptures to represent the Chewks:

We will, if the Chewks are sufficiently popular, make the mighty drillship itself, at least the portion of it emerging from the sand, the cannonbay doors open, a drill-mounted chewkannon firing from atop its cherrypicker-like arm. Also open will be the exit portals from which the Chewks pour to raid their unsuspecting targets.

Coming, hopefully, in Spring of 2010. Sculpted by "clibinarium."

Posted by khurasan miniatures at 6:05 PM