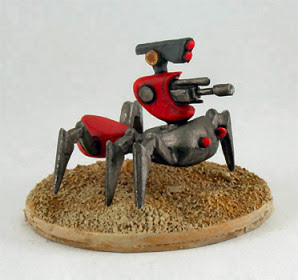 From Lambda Sagittarii come the Molokons, imperialist synthetic organisms bent of destruction of all organic life. When the great Molokon Spheres materialize in a star system, it is doomed.

The Molokons will not communicate or negotiate, they will simply begin operations to reduce the planets to their constituent silicon, then engineer these silicon globes in a way that is not well understood but results in the planets becoming part of an interstellar "lattice" conducting the Molokon Network.

How the Molokons came to be is unknown; perhaps some civilization constructed a set of forerunner synths and these seized power, or perhaps they took to fending for themselves after the creator race became extinct one way or another.
What is known from monitoring Molokon chatter is that they never discuss their creators. They care only for themselves, and expanding their network until is encompasses all of space. While Molokons speak in a monotonous drone, it is abundantly clear that they possess the synth equivalent of emotions, speaking at great length of the rich enjoyment of causing pain and destruction to organic life.
The rank and file warrior unit of the Molokons is the centaur-like Rattler, a large robot as tall as a human and considerably heavier. Each mounts a photon cannon used to pitilessly eliminate all resistance on the planet so that the great fabricator ships can process the planet. Scrabbling at the feet of the enormous Journeymen and supported from the air by the Mayfly gunships, the Rattlers move methodically across the surface of the planet, mercilessly exterminating all life forms that offer resistance. Their name comes from the unnerving rattling sound that thousands of Molybdenum talons make as they propel the Rattlers onward at speed.

Mike Broadbent has created the 15mm Rattler model, which has six legs which plug into holes along the main chassis of the unit, as well as a gun torso and head, which like the legs is posable. As can be seen from the photo below, there's some flexibility in the models -- for instance, simply remove the hatchet head of the Rattler and its whole look changes to something much more arachnoid. These are also quite suitable as sentry robots or similar for 28mm gaming. 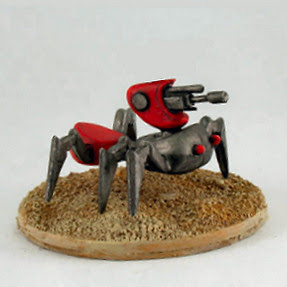 The Molokon Rattlers should be available in a few weeks. They will be followed by their giant land monitor, the Journeyman, as well as the long slender missile craft, the Mayfly.
Posted by khurasan miniatures at 5:34 PM