For thousands of years armies have moved supplies via oxcart, often thousands of them, hauling much of what the army needed to survive a campaign in the field. To this day, some armies still use oxcarts for supply. Because many games require that the supply and camp elements be depicted on the tabletop, I decided in fall of 2009 to have an oxcart made. It's been sculpted and is now at the casters. 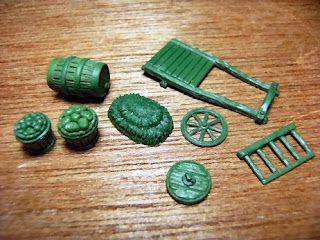 It will join the growing list of camp or equipment-type models I have had made which are now available or soon will be -- a Tibetan tent (now available), a later Medieval commoner's tent (being cast), a Late Imperial Roman "Vienna Genesis" tent (basically done, just need to get it painted and up on the website), for WWII, Modern or Sci Fi a 55 gallon drum and a dumpster (err, I mean "garbage bin" -- both being cast), and a "letzinen" stone wall section (being cast) which was made for the Early Swiss but of course is usable for any time period -- there are stone walls just like it in my neighborhood! I've also had a unit cohesion marker made for the popular wargame rules Field of Glory which is in the same boat as the Vienna Genesis tent -- it's done and I have the castings, just have to get it painted and put on the website!

Back to the oxcart, it is made as it would appear in a camp, with the animal unhitched and the yoke resting on the ground. Some of these used solid wheels, others wheels with spokes, so I have had both made. Carts usually have vertical rails on either side, sometimes being held together with a single top rail running horizontally, other times simply standing up on their own. I've had the side rail made with a top horizontal rail, but it would be a simple matter to remove it.

Since a supply cart is no good without supplies in it, I've had loads made that fit into the cart: two baskets of food -- one bread loaves, the other fruit; a huge barrel for ale or foodstuffs such as dried fish or salted pork (this would be useful in particular for armies from Medieval times on); and finally a pile of grain or fodder.

All of these pieces will be supplied in each set -- the cart, both types of wheel, and all the loads. When it will be available will depend on the caster, it's out of my hands at this point. My guess is that it will be about two months from this posting. As oxcarts in camps don't generally have the animals yoked to the cart, I have not had it made, but if there is enough demand I may have a few oxen made for different regions of the world.

Not glamorous, but useful! Coming soon (I hope).
Posted by khurasan miniatures at 10:20 AM