The Biology of Sepulveda 7: Part 10, the Space Demons (continued)

Note: this article examines the biology of the Space Demon because these at one point infested Sepulveda 7 after the defeat of the Pelagic invasion. Its publication is not meant to imply that the Space Demon is part of Sepulveda 7’s current fauna or that the eradication programme on that planet was not satisfactorily completed. Models of the Space Demon Colossus, and Nymphs, are available now on the Khurasan Miniatures website. 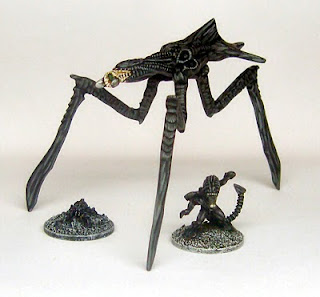 Due to its enormous size, the Space Demon Colossus (top) is an exception to the rule of Space Demon propagation; the Nymph (below left), and the resulting Assault Warrior (below right), are the norm.

The Space Demon breeds parasitically. Even in the heat of battle, the female of the species, the Queen, can within ten minutes create from her essence and give live birth to a Nymph, which resembles a slightly foreshortened version of a fully grown creature’s head with four sharp, articulated scythes for legs. Assuming she is provided with the flesh of enough victims, or hunts them down herself, she can create and give birth to as many as 100 Nymphs in a day.

From the moment they are born Nymphs skitter about seeking a host, preferably a biped like a human, and once one is found the Nymph will repeatedly and strenuously attempt to hop onto the host’s head. Once up on the host’s head, huge jaws on its belly suddenly gape and entirely swallow the host’s head so that the host appears to have the Nymph for a head, which, sadly, from this point on it indeed does. The cerebro-positor of the Nymph will immediately burrow through the victim’s skull and deep into the brain, wresting away the higher functions of the host’s body. The host’s brain is kept alive and fully functioning to control the body’s lower functions. This is a continually agonizing experience and the host can be heard screaming inside the body of the Nymph, leading some human populations to term Space Demon Hosts as “Screamers” or “Howlers.” Removal of the Nymph is absolutely impossible – its scythe legs burrow deep into the chest cavity of the host and quickly bond with its skeleton, and even if these are cut off the removal of the cerebro-positor from the host’s brain kills the host.

Over a period of approximately a week, the host’s genetic system goes into a furious acceleration and its cells are rapidly replaced by space demon cells (called “imperial” cells), branching down from the neck to the arms, chest, and finally legs. During this time the host is far from helpless and, under the complete control of the Nymph, can be quite a dangerous adversary, running and swinging its arms wildly, without the restraint that fear of self-injury usually brings. This puts the human trooper in the unnerving position of being assaulted by what was is effectively a talking human corpse, which begs for help while simultaneously pummelling him. Fortunately the Nymph does not know how to work machinery so Hosts are unable to use weaponry.

Eventually the process of assimilation is over and another fully formed space demon joins the hive, all of the cells of the host being replaced by space demon cells. All Nymphs are born as juvenile Assault Warriors, but, based on the needs of the hive, a queen may inject additional genetic material into a host’s belly to lead to the development of one of the higher sub-species of Space Demons.

It has been observed that Space Demons often populate their hives with Nymphs, the adult demons ranging far and wide looking for hosts which are then brought back to the hive to be infected. Also wandering the tunnels of the hive are often large numbers of wailing Hosts in various stages of transformation.

When a planet is heavily infested with Space Demons, queens will begin periodically laying eggs, a method of breeding associated only with the Colossus. These eggs are extremely large and a queen can only lay one in a day. This egg is laid in a deep chamber in the ground which has been dug by the Tunneller Space Demons, and hatches as a larva, a sort of armoured worm that is two meters long at birth and grows geometrically. The other Space Demons will gather live victims for the larva to eat, which are thrown screaming into the underground chamber to be devoured. Soon the entire chamber is filled with the expanding body of the larva, which cocoons and soon emerges, digging itself from the ground, as a tripodal Colossus, most terrible of all Space Demon creatures.

Striding rapidly across the planet’s surface no matter what the terrain, seemingly always in balance atop its three legs, the agile Colossus has many methods of attack. It can impale smaller prey with great dexterity using its razor-sharp legs, flicking a wounded victim off toward other space demons so that the injured creature’s body can become a host for a Nymph. It also bombards more powerful prey, and especially mechanical weapons systems, with its most potent weapon, the void cannon, from which pulses an extremely powerful blast which few targets can survive. Time and space seem to buckle and warp immediately before the void cannon is discharged. Jutting permanently from the creature’s outer mouth, its extensor jaws serve as the barrel of this terrible weapon, but are tipped with two enormous teeth which can flex open and shut, ripping the thickest armour to pieces. Even Federal L-HACs treat these jaws with great respect and strive to avoid the bite of the Colossus.

But the Colossus has one more weapon in its arsenal. Before a great hunt, the Colossus will lower itself and a dozen nymphs will scurry up its legs, then into the nymph-nodes on either side of the Colossus’s head. The Colossus can shoot these nymphs out of the nymph-nodes to fair distances toward enemy infantry formations, the nymphs hitting the ground running, attempting to swallow the heads of nearby prey. For human defenders, this is usually the most terrifying aspect of the Colossus -- its ability to insert the dreaded Nymphs directly in such close proximity.

The Colossus can walk with its legs extended so that it can attain great height, but is often seen in combat with its three legs bent, which puts it closer to man-sized prey and is a more stable platform from which to fire the void cannon.
Posted by khurasan miniatures at 4:52 PM