We're about to release our next range of ancients (technically Medievals/Renaissance) -- the Chinantecs, a confederation of people from 20 towns in the Oaxacan highlands in what is now Mexico. They were fierce enemies of the Aztecs and so welcomed the Spanish as allies in their struggle to remain independent of Aztec conquest. Histories vary but some say that they had been conquered just before the Spanish arrived in a bitter series of campaigns, others asserting that a few of the towns were still holding out when the Spanish overthrew the Aztecs. 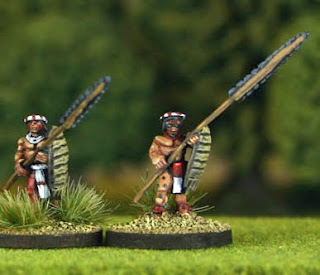 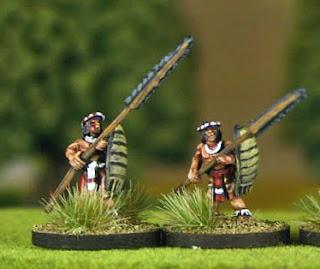 Probably the most interesting element of their warfare was their use of phalanxes of spearmen using enormous spears, reported, perhaps with some exaggeration, to be over 6m (20 feet) long. Even more unusual, these spears have razor sharp obsidian glass embedded along the lateral edge of the pole, running a considerable length down the shaft. The soldiers who used these spears also used a cloth shield called a pavesina by the Spanish, suggesting it was large and roughly rectangular, this shield apparently being of thick fabric so that when not in use it could be rolled up and carried. 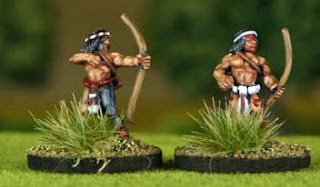 The Chinantecs also used archers, although their role is unclear. They may have formed behind the spear masses to shoot overhead at the enemy, as this is the way they marched to the aid of Cortes during a Conquistador civil war -- intersperced with the spearmen. Or they may simply have marched that way, and formed separately as skirmishers on the flanks or to the front of the spear units. 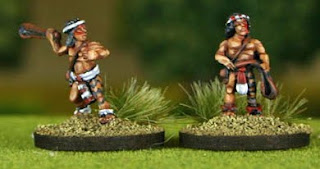 They also are described as using some slingers, a common troop type throughout ancient Mexico, so we have made some of those as well. They may seem a drab troop type, but the sling was one of the weapons most feared by the Conquistadors.

Next we come to their nobility who, very unusually for Mexico, used the bow, but this was supplemented with the macana, a wooden club/sword edged with obsidian. The macana had a loop for the warrior's wrist. The best interpretation of how they carried it whilst shooting is that they wore it dangling from their wrist as they shot, which to a non-archer like me seems precarious, but I've had archers assure me it would be no problem! You can only see it on one pose here because of the angle, but the nobles all have a macana dangling from their right wrist. They also wear thick fabric armour and helmets which sport fancy feather decorations. 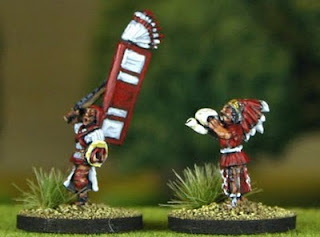 Finally we have a leadership element, a warlord wearing a back standard, and a musician with a conch shell trumpet, common in this part of Mexico.

When the Chinantecs marched to the aid of Cortes, they arrived just too late to fight, and the captured rebels apparently considered this very a good thing! They are quoted as being very impressed with the martial bearing of the warriors. As can be seen from the images, the Chinantecs painted their faces and legs in black and/or red warpaint. They models are depicted in the long breechclout and sandals that were typical of the peoples of the area.

To read more about the Chinantecs, you may wish to consult Ian Heath's wonderful wargamer's guide, ARMIES OF THE AZTEC AND INCA EMPIRES, OTHER NATIVE PEOPLES OF THE AMERICAS, AND THE CONQUISTADORES (Armies of the Sixteenth Century).

This army is a new and fresh element to the DBMM game system, is also provided with a list in Field of Glory, and will also be included in the Field of Glory renaissance list, so it's one of those fortunate forces that sits astride time periods and allows you to use it for several different game systems. Should be released within the week, look for an announcement soon.

Posted by khurasan miniatures at 11:24 AM