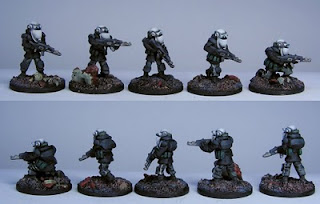 After failures using various alien mercenaries to control the rebellious population of Sepulveda 7, and so that the incredibly valuable extraction of Angravium would continue unabated, the overlord of the Jo-eli Freehold, Jellina Jol-i I, decided to genetically craft her own soldiers. For this she used the vast resources of Sepulveda to oppress its own population -- the staggering wealth derived from the planet's huge stores of Angravium financed the scientific and medical research necessary to forge a race of supersoldiers from a witch's brew of human and alien DNA.

Naturally, this was a serious violation of Federal law, and accordingly the work was conducted in complete secrecy in the Black Tower, Jellina's fortress/palace built on an asteroid in the 368 Sumita system. In an effort to conceal the purpose of the research and experiments, each science team's work was very narrowly proscribed, fusing of the research being left to only the most devoted (and thus demented) of her scientists. 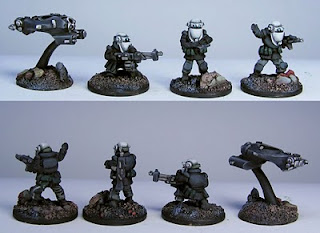 But no bottle remains corked forever. One young scientist initially excited about the research he was hired to conduct, David Rimmer, accidentally learned its ultimate goal, to his utter horror. With his own eyes he saw that Jellina was doing the unthinkable -- tapping the DNA of the ghastly creatures of another dimension, her transplanar expeditions finally having found, in the Imperial Maggots of the Maggoton Empire, suitable DNA for melding with that of humanity. What Rimmer spied one day in the top Secret TBA (Transhuman Breeding Area) was almost beyond comprehension -- part human, part maggot, these creatures were homicidal beyond description.

However, Jellina's scientists had found a method to keep them under control, using a chemical cocktail pumped into their lungs in a fine brown mist, constantly administered within the sealed domes of their permanently installed helmets. Sedated in this way, they made the perfect soldiers -- fearless, cunning and obedient.

Rimmer quickly decided on a course of action, sabotaging the TBA and fleeing the Black Tower, wearing as he went one of the special enviro-suits that scientists were provided to protect them from the intensely toxic Maggoton organic material. Rimmer vowed to stop Jellina's plan, and to aid the people of Sepulveda, whom he now realized were not traitorous rebels as Jol-i propaganda asserted, but rather freedom fighters attempting to throw off her oppressive yoke.

This was a setback, but Jellina soon had the TBA restored and thousands of Control troopers were being bred, domesticated, trained and sent off to Sepulveda where they were a rude shock indeed for the Resistance.

Operating in squads of nine, each used a pulse rifle, and the squad also included an SAP (Squad Assault Pulser) and a remote controlled drone which mounted both an HPW (heavy pulse weapon) and a grenade launcher. Operated by a remote pilot, the drone was often in the forefront of battle, its heavy chassis protecting it from small arms fire.

These troopers took the Resistance by storm, pushing them back on all fronts and asserting Jellina's control over the mining of Angravium, not to mention rounding up subjects who were suspected of Resistance ties -- to what fate, it is not known, for once rounded up, they never returned.

As they strode purposefully through the streets of Sepulvedan cities, villages and settlements, these strange masked troopers inspired fear but also intense speculation. Why had no one ever seen them remove their helmets, or eat or drink anything -- ever? Why when they spoke was it in a weird, digitally altered hiss? They became known, with fascination and dread, as the CoBas or, more often, simply the Helmets.

CoBa crews manned (if such a word can be used for transhumans) Jellina's motley collection of vehicles as well. A single company of CoBa infantry could have some of its squads carried in the MDMS Canetoad APC, others in the few remaining Atlas APMs acquired before the Federal trade sanctions, still others in the Hedgehog APC purchased from Nova Respublik, or even in the ramshackle Sod-Kafez 2.51 "Karkwagon" sold throughout the galaxy (usually for a song) by Karkarine military contractors. CoBa urban patrols were often conducted in the Locust Patrol Truck, these sinister black vehicles being widely used to "disappear" Resistance suspects in the middle of the night.

So successful were the oppressive activities of the Control Battalions that the Federation itself chose to intervene in the Sepulvedan Campaign, though at first covertly, sending Federal Marines in Resistance garb to aid the citizens of this war torn planet. For who knew what horror lurked within the bolted-on helmets of these strange troops, Jellina's obediant attack dogs?

We will soon be releasing two packs of Control Battalion infantry -- the rifleman set and the command and weapons set. Look for a release the week of February 7, 2011.
Posted by khurasan miniatures at 12:52 PM