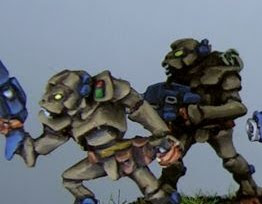 When a Felid baron leads his circles to war, he generally has a household bodyguard of veteran warriors which rides in his Lion transport and fights by his side. This is the baron’s Prideguard, promoted from the best of the Alpha Warriors in his circles.

The Prideguard can be concentrated around its lord, or it can be spread throughout the Baron’s circles, acting as elite cadres to bolster the rest in combat.

The most distinctive feature of these household soldiers is their helmets, which provide the Guards enhanced visual and aural perception, an independent air supply, and closer communications with their baron, just as he is linked to the Alpha Warriors commanding his other circles.

These helmets are expensive for cash-strapped Felid baronies, but the wealthier barons have the financial means to also offer the Prideguard helmet as a reward, granting them in a brief ceremony after battle to one common warrior who showed conspicuous bravery. Being granted such an honorific helmet generally creates a fast track to promotion to a coveted position of Alpha Warrior in the circle. Not all Felid warriors see the honorific helmets as purely a blessing, however, as such a reward generally invites the rivalry of the established Alpha Warrior in the circle. Furthermore, most Felids initially dislike wearing these rather form-fitting helmets, for it is against their nature to wear anything on their faces or heads, and they perceive enclosure within the helmet as an impingement on their own keen senses (although they soon learn that the helmet actually improves their senses).

Whatever its perception within the circles, the Prideguard helmet is a clear sign to the foe that they are facing the most formidable of the Felid warriors, endowed with the greatest situational awareness.

Our latest pack of Felids, the Prideguard, is now available in a circle of ten, with one Prideguard Alpha Warrior (generally the eldest son of the baron), one Prideguard Warrior with a Heavy Plasma Gun, one with a Grenade Launcher, and seven with heavy blasters.
Posted by khurasan miniatures at 5:38 PM