The Orca Assault Warriors of the Pelagic Dominate 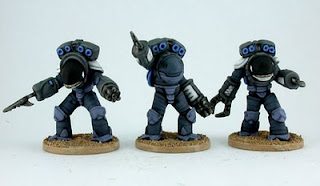 A pod of Orca Warriors, showing a variety of weapons and helmet types -- both the clear dome for insertion strikes and the hard helmet for planetary assault.

The spacefaring xenophobic aquatics of the Pelagic Dominate have an ace in the hole for special strike missions -- the Orca Assault Warriors, large power armour wearing mammalian sentients who have evolved from carnivorous cetaceans. These behemoths are as intelligent as they are strong and fearless, and have been equipped by the inscrutable Cnidarian Overlords with a powered battle suit of immense strength and durability. 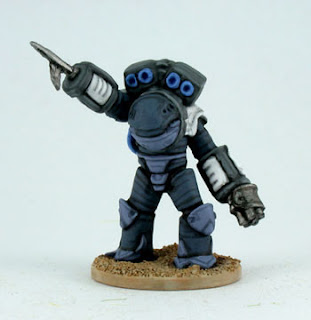 When the Cnidarian exploration craft reaced Orcos, the home world of the Orcas, they found a strong spacefaring people ready to contest any conquest. However, when the scout, a delphine diplomat, explained the goals of the Dominate, the Orcas willingly decided at a meeting of the Orca high council pod to submit to the empire, seeing the logic of it -- provided, that is, that two conditions were met. First, they must be allowed to keep their ancient traditions in governing their own world. Second, once a conquered world was aquafarmed, as a mark of their special status they must be permitted to swim that sea in a procession before any other Pelagic life forms. The response of the Cnidarians was mysterious to the Orcas, but the delphine diplomat interpreted for them, saying that these conditions were acceptable. 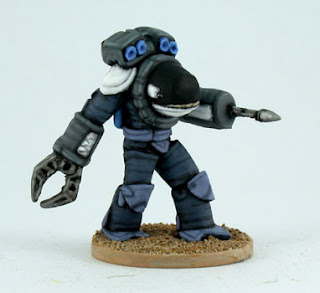 The Orcas being intelligent crafts-creatures by nature, each Orca noble makes his own weapons, as is dictated by tradition from time immemorial. Their main armaments are for close combat, the dreaded Ahab power harpoon and the Behemoth power claw for manipulation. For close range shooting they use the multibarreled Stingray gatling gun. 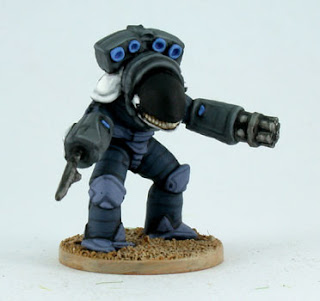 Added to this arsenal by the Cnidarians are several other weapons, for the Cnidarians employ the Orca Warriors as elite special strike forces, often teleporting to a target, destroying it, and teleporting out. One such weapon, the Barnacle smart missile system, is an intrinsic part of every Orca battle suit, firing a blizzard of high explosive smart missiles at numerically superior infantry foes. Another vital weapon is the Sea Snake anti-structural missile, fitted to an arm hardpoint of the suit, permitting the warrior to destroy heavy tanks or structures such as command posts, bunkers and power stations. 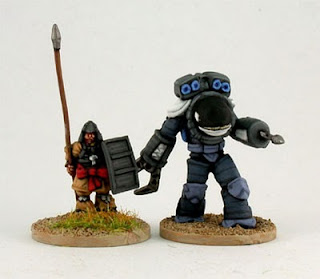 An Orca Assault Warrior compared to a primitive human -- meeting fanatical but hopelessly outgunned resistance, the Pelagic Dominate aquafarmed this world in only two Pelagic Cycles.
Orcas are often deployed as well in the first wave of an assault, providing some heavy support to the Myzontid Rangers. Like the Myzontids, they are provided with pheromonal exuders so that they are effectively invisible to the swarming bioweapons that are dumped onto the planet by the invasion fleet. The Orcas are intelligent, vocal mammalian sentients, and very different in temperament from the silent, terrifying Myzontids, but the two troop types have developed a rapport and supported each other well in many a successful opening assault.
These models are in 15mm scale and will be sold in a pack of three. One model is gesturing forward and is the pod leader. As can be seen, they come both "bareheaded" (this actually depicts a clear dome-helmet that is worn by the warriors, mostly filled with water but having enough clearance for the warrior to breathe air from his blowhole) and coral-steel helmeted options, as both are used by the Orcas, it being an easy swap on the suit. Enough bare and helmeted heads are provided so that all of the warriors can be "bareheaded" or helmeted. The pack also includes a wealth of spare pieces that can be plugged into the three suits' hardpoints -- Sea Snake missiles, Ahab power harpoons, Stingray gatling guns, and Behemoth power claws. A great deal of extras are in the pack.

These should be available in a few days after the date of this posting, along with the Myzontid rangers with whom the Orcas so often cooperate. Keep an eye on the 15mm sci fi store page. Pedro Ramos sculpted the models and Steve Dean painted them.
Posted by khurasan miniatures at 11:38 AM