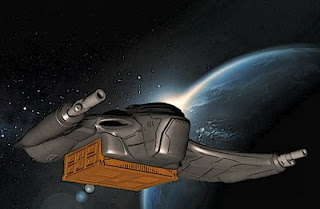 A "Bulldog" DPLS flying its freight pod to a neighboring star system is a familiar sight in planetary orbit.

The Tribal Class DPLS (dual purpose light spacecraft) is the most widely used light interstellar spacecraft in the galaxy. This vessel was the brainchild of Sivapathasundaram Patel, the visionary FTL designer of the “Block 16” series of light exploration craft, and is manufactured by Puja-Patel Light Spacecraft Company, a division of ConglomCo. (Patel named the company after his daughter.) Having designed the Block 16 vessels which had established humanity in space, Patel’s next goal was “to create a vehicle that could keep us there,” a single interstellar ship which can be used interchangeably for a dizzying variety of military and commercial uses with little modification. With little effort, the “Bulldog” (the popular nickname of the spacecraft due to the appearance of the cabin) can be configured to perform an impressive variety of roles. Thanks to its ability to hover and land vertically by vectoring the main engines and a suite of thrusters arrayed across the vessel’s fuselage, it can generally go wherever the crew wants to take it. 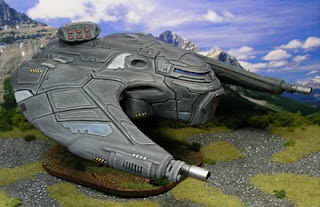 Even without the Federal navy weapons pod installed, the DPLS still packs a serious punch, as this craft on a NOE attack run against a pirate base is about to prove.

STRIKE
The DPLS is a large, deadly strike craft, in Federal naval service adding one of two weapons pods for attack runs – either the surface attack pod or the fleet strike pod. Like all pods for the DPLS, these can be swapped on the craft, and the accompanying molware reconfigured, in less than ten minutes.

This DPLS is configured for freight carriage and has its 200mm laser cannons stored in the weapons bay.


DROPSHIP
The DPLS can transport up to 36 armed men into battle via planetfall from heavy fleet transports, or 24 armed men when travelling between adjacent star systems, the optional military cargo pod providing them with stowage for a variety of light weapons and supplies. While the troops are being inserted they are protected by the DPLS’s missile turret and its armament of wing-mounted 200mm laser cannon – the turret with its guided missiles being particularly useful in providing them fire support whilst the DPLS is landed.

PASSENGER TRANSPORT
Chances are if someone travels between systems in Federal space, it’s in a DPLS. For short hops up to 24 people can be carried, although Federal guidelines (widely ignored) call for carriage of no more than 12 passengers. For long term trips up to six passengers can be accommodated in two cabins which offer relative privacy, being constructed using fold-down dividers. 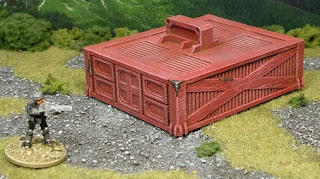 The ubiquitous cargo pod of the DPLS can have its top removed for bulk unloading, or the doors on the side can be opened for unpacking of smaller items by individuals or cargo bots.

FREIGHT CARRIAGE
The most widespread peacetime use of the DPLS is in carrying light freight loads across the galaxy, sometimes literally so. The ubiquitous cargo pod of the DPLS can carry up to 24 tons of cargo and an additional 20 tons of cargo can be carried inside the craft itself. Due to its ability to vertically land, unhook the cargo pod and take off, the DPLS is sometimes used to resupply besieged outposts or units in the midst of battle.

The DPLS is also often used to ferry cargo from larger freighters to planetary surface.

THE NAVAL RESERVE PROGRAM
The Federal Navy holds over 6,000 DPLS -- at any time 2,000 of those being on active service and 4,000 in the Merchant Reserve, these latter vessels operated by Navy Reserve pilots who lease the craft and use them to ply a variety of shipping or passenger carriage trades. These NROs (Naval Reserve Operators), as they are called, need to follow strict guidelines for the use of these vessels; for instance, when crewed by/transporting aliens, only SNH (Sanctioned Non-Humans) are permitted aboard, and the wingtip laser cannons are supposed to be dismounted from the vessel and stored in the weapons hold. (This requirement is selectively ignored by Federal NRP inspectors, who, as Navy men themselves, usually look the other way if the NRO is shipping in dangerous zones.)

In time of hostilities, NROs are required to promptly return to their home port, or rendezvous with their Naval Battle Group if it is deployed. Their DPLSs are expected to be fully prepared for combat operations by the time they reach the Battle Group.

THE DPLS UNDER CIVILIAN OWNERSHIP; USE IN PIRACY
The Tribal-class DPLS is not solely a military vessel; in fact it is primarily commercial, only 25% of all DPLSs being owned by the fleet. They are also purchased by private companies or individuals for commercial or recreational use, but these vessels have the wingtip pods permanently installed and of course are not provided with laser cannons. While they mount the missile turret for self-defense, strict fire protocols are built into the molware of the ship to prevent them being used for offensive purposes. (This is at times overridden by some users, in violation of Federal law.)

Unfortunately, these vessels fall into pirates’ hands at times, either by force of arms or because the owner has sold the vessel in desperation, if not lost it in a game of chance. Lhurgg pirates eagerly use these vessels once they are rewired to accept prohibited alien entry, and repaint them in lurid patterns as is the preference of those creatures. Such vessels are invariably filthy and badly maintained. Kark pirates have also been known to finagle the purchase of a DPLS similarly rewired, and these run a tight ship, often jury-rigging an aqua-system in order to create an H2O environment inside the vessel.

The DPLS is so omnipresent that, in situations of piracy where a Federal vessel comes to the aid of a commercial freighter, it’s not uncommon for the commercial, pirate and Navy vessels to all be the same type!

CLASS NAME
The class name, “Tribal,” is an acknowledgement of the multiplicity of the race for whom the vessel was designed – each vessel carries the name of a tribe from human history, the word “tribe” being interpreted very loosely to include any established name for an identifiable group of people; due to the number of vessels, the vessel names often end with a roman numeral after the tribal appellation. For instance, the DPLS that was instrumental in running arms to the Sepulvedan Resistance, and later secretly carrying Federal marines to Sepulveda, the UFS Samnite IV, was named after a nation of aggressive Italian tribesmen who fought tenaciously against the encroaching power of the ancient Romans. As is well known, that ship lived up to its name. Other vessels carry such names as Huron, Geordie, Ainu, Cripp, Rus, and so on.
THE MODEL
The Tribal-class DPLS is a 15mm scale model, and can be assembled in a number or different configurations. It has a flight stand and landing gear that can be depicted either up or down, and the vessel can be removed from the flight stand. It also comes with the standard cargo pod which is used when the vessel operates as a dropship or freighter, and this can be attached or left off. The flight stand plugs into the cargo pod, and the cargo pod plugs into the vessel. Or the cargo pod can be removed and the flight stand plugged directly into the vessel. The exit ramp can also be depicted opened or closed, and it’s a tight enough fit that it could be left unglued, although you might lose it that way, so we recommend you choose one and glue it! The DPLS was designed by me and Mark Mondragon, and rapid prototyped by Mark. The computer renders are by Mark, and the physical copy was painted by Neldoreth of An Hour of Wolves and Shattered Shields. Available soon!
Posted by khurasan miniatures at 10:43 AM