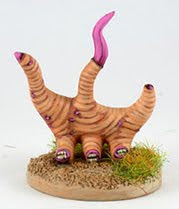 One of the many body forms that Molch "extensions" take
The Molch Vornid War is an ongoing, localized conflict outside the boundaries of any of the great spacefaring races, in the FUZ (Fifth Unincorporated Zone). The Molch, a peaceful and intellectual, but physically hideous race, have long provided the sentients of the galaxy with thought provoking philosophical tracts. Be this as it may, they have nonetheless attracted the unkind attention of the sentient Vornids, botanoids (plant creatures) who, apparently on religious grounds, are incapable of tolerating the extreme ugliness of the Molch and are conducting a holy war to “cleanse” planet Molch of its occupants.

Invading Molch in force, despite its considerable distance from Vornus, and setting up fortified bases on the planet, the Vornids initially conducted ghastly sweeps in which they annihiliated the peaceful Molch who naively came to greet them as friends.

But soon it became apparent that the Vornids had started a fight rather than a massacre, for the Molch, when given no choice but to defend themselves, are capable of just that, conducting tenekinetic and psychic attacks of startling destructive power.

The Molch also proved more difficult to eradicate than anyone had anticipated – while the details are still unknown even to the friends of the Molch, each individual creature seems to be a physical “extension” of one or more vast beings which reside at the core of the planet itself (or, at least, somewhere under its surface). When a Molch extension becomes elderly, it disappears into certain designated caves called life-portals and soon thereafter another Molch extension emerges, unlike the first and fully mature (there are no Molch children, nor do they appear to be separated by gender). Thus, as long as a Molch extension, living or “dead,” is capable of being transported into one of these caves, it will soon emerge as a new extension. In this way many sectors which seemed “cleansed” by Vornid attacks were in short order heavily populated by Molch again, aimlessly wandering about and chatting amongst themselves, as they are wont to do.

And so at first the Molch seemed quite capable of defending themselves against the Vornids, who had opened this campaign with very aggressive tactics, sweeping straight down on Molch population centers in their slaver galleys and engaging the Molch at point blank range -- the very range at which Molch psychic blasts were at their most devastating, ripping Vornid troopers to pieces or turning them inside out, their slaver galleys brought down in flames. And at their command, certain types of Molch were able to animate stone into vaguely human form (the form they had long ago noted to be most effective for close combat). These towering stone constructs, the Molch Defenders, had only one purpose -- hammering the foes of the Molch – and they never slowed or tired in its pursuit. Although they could be destroyed with enough firepower, the Defender-construct battalions were phenomenally resistant, and utterly terrifying foes in close combat.

But the Vornids rapidly adapted their tactics around the strengths of their hated race-enemy, as was their way. Now they take to opening battle by bombarding Molch population aggregations from space, then move the slaver galleys in to conduct long-range direct fire from nape of earth, often many kilometers away, bringing the devastating power of the mighty ventral rifles to bear, and closing in only when many Molch have been “killed” and Defender-constructs smashed into pieces. This has proved to be a very effective tactic and evens the score in the resulting close quarters battle.

Not achieving the instant victory they had anticipated, the Vornids supplemented their own expeditionary crusading army by hiring large numbers of mercenaries from far and wide, a rogues’ gallery of pugnacious alien regiments exploited as cannon fodder but also at times hired for their specialist combat skills. Kark and Stick regiments served the Vornids in large numbers, using their native vehicle technology to carry the fight to the Vornids. Felids also joined the fight, sub-contracted by the Garn reptilians who are the overlords of the Felids and who have close economic relations with the Vornids. Indeed the Molch-Vornid War is just one of the many campaigns the Felids have had to endure when they have no enthusiasm for the fight and no love for their employers. As one Felid wrote back to his cub, “there is no honour in making war in this way, my imravi … using long range firepower to blast peaceloving creatures … making war upon animated stone machines … serving detestable, emotionless creatures which sway like the weeds in the breeze, stink like a bog, and have no faces. This war wears us down, imravi, but heed my words -- disloyalty to our masters, those who rose us up, would be more dishonourable still.”

The Vornids quickly came to the conclusion that the key to victory was destroying or at least neutralizing the Molch life-portals, striking at the mysterious underground “essence” that generated the individual Molch. And with each battle they are gradually achieving his goal, establishing bases closer and closer to the life-portals, although at bitter cost. Detest it though they may, soon the embattled Molch had to consider adopting some of the methods of their Vornid enemies – by spreading it out to other races, reaching out, somehow, to someone who might help them to preserve the Molch essence that continuously dwelt below the surface for millions of years.

But how? Contact with the humans, their faraway spiritual allies, was impossible due to the extreme human reaction to the Molch physical appearance, which invariably brings insanity with long enough exposure. And only through the humans, with their vast net of contacts and communications, could they hope to approach other races to seek out help.

The Essence pondered this question, and then came to a conclusion – it would create a new kind of extensions, these to be shaped like the humans, which would hopefully be at least tolerable so that humans and Molch could communicate in close proximity. And it set about attempting to generate such extensions, at first bringing to being many that were wholly unsatisfactory, and had to be folded back into the Essence. It was a grave expenditure of energy and thought at a time that this could be ill-afforded, but finally, with the crucial help of one selfless human philosopher who traveled to Molch and gave her sanity so that the Essence might better understand human physicality, extensions began to emerge which vaguely resembled human life forms. They had no tenekinetic powers, and were thus unable to defend themselves. As a wholly new variety of extension, they did not have much of the wisdom of the Essence, and were often naïve and fearful, and the Essence fretted over them. These new extensions were indeed still hideous to human eyes but at least were not madness-inducing to gaze upon and communicate with, and they conquered their fear and feelings of vulnerability, traveling out alone, spreading far and wide, seeking human help wherever they could find it. They called themselves the Molch Emissaries.

And these kindly, hideous creatures achieved their goals, and human help came.

Billions had read, heard or digi-grated the philosophy of the Molch and taken it into their hearts, and were willing to tolerate the nausea-inducing appearance of the Molch Emissaries in order to save the wise and kind spirit that had generated them. Forbidden by federal law to serve as mercenaries, the humans either arranged for the Molch to hire alien mercs, or served themselves, outside the law. Entire battalions were formed, some idealistic volunteers, others mercenaries hired by human donation, purchasing their arms from Mercanto-Dett Military Solutions, the great multiplanetary corporation based on New Australia, or from the black market, these being mostly Nova Respublik weapons and vehicles. In coordinating the actions of these human battalions with the overall Molch defense, the Emissaries proved their worth again, acting as communications links between the humans and the Molch, who the volunteers could not set eyes upon without going mad.

Human financial contributions also hired Kark regiments to assist the Molch, and these fought well, sometimes against their own kind, bringing their native-designed vehicles with them.

Combattants of the Molch Vornid War, seen to scale -- a Felid, an Ursid and a Molch Defender-construct
Further allies and mercenaries came to the Molch almost by accident. Perhaps the best example of this was those famed Armadilloid gunfighters, “los Viejos,” who were at first approached by the Vornids to serve as mercenaries but upon hearing the grisly details promptly killed the Vornids and traveled to join the Molch side. While they were not pleased by the appearance of the Molch, they served right amongst them, often acting as an elite close-range fireteam, for it is said that los Viejos never miss a target they fire at with their dreaded plasma sixguns.

Another example of such a fortuitous alliance involved the Ursids, massive, phlegmatic creatures who have been exiled from their Federal homeworld and now travel the galaxy selling their services to the highest bidder. The Ursids love a good brawl and bring daunting firepower to bear – their standard armament is a BPFG (bear-portable fusion gun) which can crack open a heavy tank at long range. First sub-subcontracted by the Felids, the Ursids immediately took a disliking to the conflict and particularly to the Vornids, and at the first opportunity changed sides, working for less than their normal wage, which was to be paid by human donations. The Ursids have become accustomed to the appearance of the Molch, although like virtually all sentients they find them to be disturbing to be around for too long a time.

Regarding the war itself, the Molch are, as always, philosophical. They seem to take it almost in stride that the Vornids are fanatically seeking their destruction, and have even published poignant tracts in which they plead with other sentients not to judge the Vornids too harshly for their actions. This does not mean, however, that they permit the Vornids to destroy them or penetrate the secrets of their subterranean essence, and the fight goes on, with no quarter on either side.

One thing the Molch truly do fear, however, is that this war will eventually draw the attention of the Cult of Andromeda, as local wars often do, as flies are drawn to a corpse. About this the Molch are very clear – the Cult presents an existential threat and is never, under any circumstances, to be suffered to survive. Few creatures have pondered the universe and the nature of existence as continuously as the Molch, and so few can appreciate the nightmare that can be unleashed by Andromeda and her followers.

Our first codes for the combatants in the Molch-Vornids War are in fact already available – the Molch themselves, released as Lovecraftian intergalactic terrors in our popular 1930s Eldritch Horror range. The models were however specifically made to represent the various types of Molch “extensions,” including the vaguely humanoid, although still disgusting, Molch Emissaries, who can be used as command liasions between the Molch and their various allies. To be released very soon will be the (literally) heartless Vornid pirates, the big, even-tempered Ursid mercenaries, and the big animated-stone Defender constructs. Soon after those we will release the armadilloids called “Los Viejos,” the deadliest shots in the known universe – death in a sombrero. Stay tuned for more information.
Posted by khurasan miniatures at 6:14 AM