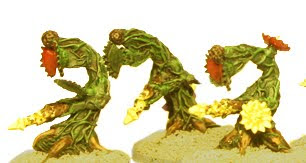 Perhaps the strangest of all the sentients in known space are the Vornids, commonly called “slavers” or “pirates” because they often engage in piracy or raiding for the primary purpose of seizing other sentients to sell in the galactic slave market. They inhabit a chain of heavily fortified colony pods on the mid-level belts of the gas giant Vornus 5, and also live, sometimes temporarily, in many colonies and outposts in outlying star systems. They possess sophisticated technology and are capable of FTL travel.

Vornids are the only known sentient botanoids capable of fairly rapid movement. They transport themselves using a series of motor-vines emanating from the base of the body trunk, and are also capable of precise manipulation using mid-trunk manipulator-vines. They are capable of obtaining energy by both consuming other life-forms just as animals (and some plants) do, or by more conventional photosynthesis. They “see” by continuously emitting spores from a single “eye” on top of the body trunk, which return information to the individual. While radically different from the senses of most sentient animals, this system evidently produces roughly equivalent awareness of the creatures’ surroundings.

Because of the unlikely physical nature of the Vornids, the prevailing theory amongst federal scientists is that, rather than evolving into this form, they were engineered. One possibility is that the Vornids were created as a race of slavers by an imperial race which no longer exists, or has yet to reveal itself. The Vornids’ social interactions with other sentient races are limited to raiding, piracy, trade in slaves and goods (putting slaves into the market and taking raw materials and finished goods from it), and banking, which is a thriving business for them. Due to their active engagement in slavery the Federation has criminalized any form of trade or financial transaction with the Vornids, including use of their galactically-famed banking system, but alien civilisations (and less scrupulous Freeholds) are actively engaged with the Vornids on all levels.

No matter what the level of engagement may be, however, until recently there were no species of animal sentients in known space which had any significant level of comprehension of Vornid motives, biology or society. They remained a mystery even to the Garn, who heavily employ the no-questioned-asked Vornid banking services, and the Karkarines, who often act as interpreters and go-betweens for the Vornids.

Their motives may not be known, but their methods are. When on raids, the Vornids appear on a planetary surface in force, relentlessly driving sentients before their implacable advance. Their large Slaver Galleys skim rapidly along, hugging the surface, huge barbed grabber-vines dangling down, embracing any unfortunates in their path and stuffing them into expanding trap-bladders on the bottom of the Galley. Any creature that enters these trap-bladders cannot escape or be rescued unless it is released by the Vornids themselves, as species-specific toxins are released into the trap-bladder when any attempt is made to open them.

The great Slaver Galleys also function as combat transports for the Vornids, each Galley being able to carry a squad on a dorsal troop platform, into the surface of which the squad is able to root itself securely, using their motor vines. The Galley mounts its own firepower, a huge ventral rifle of formidable power, capable of destroying a heavy tank with a single shot, as well as two deck guns manned by Vornid crew. These deck gunners are the only crew apparent on a Slaver Galley, and so it seems that the Galleys are themselves living creatures, because they maneuver and also fire the ventral rifle when no Vornids are seen aboard.

Vornid infantry squads are made up of the basic troopers with their trichome rifles, which propel multiple stingers at great speed. These stingers appear to be guided by the shooter, as they swerve and strike at targets that are out of direct line of sight, making their shooting attacks unusually effective. Over time the stingers adapt to take advantage of the genetic peculiarity of their targets. Depending on the susceptibility of the targeted species the stingers can cause rapid death, temporary immobilization or, in the most resistant species, only mild irritation. The most common human response is incapacitating pain, although multiple attacks can lead to cardiac arrest. The trichome rifle is suited for use solely by the Vornids themselves, and should not be handled under any circumstances as the weapon self-envenomates upon contact with animal tissue. Vornid troopers apparently need to use both of their manipulator-vines to shoot the trichome rifle, although Vornid commanders, recognizable from their ventral thorns, wield a small pistol-like version of the rifle in one manipulator-vine, leaving the other free for other purposes.

The largest weapons carried by Vornid infantry are the thorn cannon and the heavy trichome gun. The thorn cannon has considerable anti-armour capability and is able to penetrate the battle dress of Federal SAB troopers. The heavy trichome gun is essentially a cognate of Federal squad automatic weapons, being capable of longer ranges and a much higher rate of sustained fire than the trichome rifle. These heavier weapons can either be carried by some troopers in infantry squads, or in their own units.

As botanoids, the Vornids are extremely tough and exceptionally difficult to kill in battle, particularly because most weaponry in use amongst the major powers has been developed for purposes of incapacitating animal life forms. They also do not seem to experience fear or panic, and as such proven combat tactics often do not yield the expected results. Whilst Vornids are relatively agile for botanoids, they are still not as fast or maneuverable as most animal sentients. However, they are capable of digging their motor-vines into the earth and are extremely difficult to expel from a position.

It is impossible for animal sentients to communicate with the Vornids unless they provide a V-trans device, which is worn on a sentient’s forehead and permits the wearer to understand simple communications from a nearby Vornid also wearing a V-trans device. In this way the Vornids have very effectively controlled and limited alien understanding of their communications. In fact, until the Molch-Vornid War, nothing was known of Vornid motives or racial goals at all. This war, the only one launched by the Vornids for purposes other than slaving, shed the first light on the Vornid racial consciousness, perhaps permitting Federal scientists to rationally speculate about how the Vornids might react when faced by certain challenges. But what we still have much to learn about this mysterious race.

Part II will summarize the start of the Molch-Vornid War.

The Vornids will be released soon, in three packs -- the warrior pack of eight different poses, the heavy weapons pack with two thorn cannoneers and two heavy trichome guns, and the command pack with two low-level commanders and a high commander. Each pack contains sprues for the Vornid's mouths, half open and half closed, but there are some extra mouth pieces in case you have some preference. Also in the pack are accessory sprues with flowers, leaves, and other growths that can be commonly seen on many Vornids. These are purely optional and may be left off. Also released with the Vornids will be the Molch Defenders, huge stone creations used by the Molch to defend themselves, and the Ursids, cigar-chomping bearman mercenaries who carry heavy fusion guns into battle. A little further down the line will be the huge Vornid Slaver Galley, and vehicles used by the Karks when they perform mercenary service on their own.

Those of you who have been following the discussion on TMP will know that the Molch themselves are the creatures already released as "Thing from Beyond" in our new Eldritch Horror line -- they were originally made as the Molch, peaceful and intellectual but hideous creatures, but they are being crossmarketed as Eldritch nightmares too. Stay tuned for more delvelopments.
Posted by khurasan miniatures at 5:17 PM