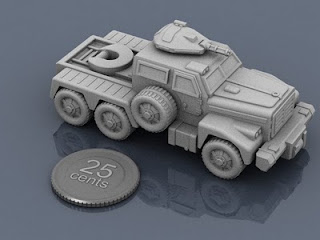 This heavily armoured tractor is armed with a rotary cannon mounted in a turret, but its primary use is to carry a variety of payloads into action, including the APT (armoured personnel trailer), as well as the JUGC (joint use gun carriage), which will have a mount for an AAA suite, a heavy artillery piece, and an MLRS.

Also planned is a dropfit guntruck rear that will carry several men and lots of guns for patrol purposes. This won't be a trailer, it will be a direct attachment to the back of the APM.

The design of the Altas is inspired by current combat conditions, such as the use of MRAPs and the Stryker in ongoing wars. Wheels seem to be the way to go, or at least one viable way. Also, from a marketing perspective, there are so many one-bodied APCs out there, and so many tracked or grav carriers, that we thought it would be fun and different to introduce a wheeled and articulated APC/Gun Carriage into the market.

The Atlas will be joined soon by the gigantic Siler Superheavy Tank, and its passengers, the Federal Army infantry, will also be released imminently, with more planned.

In a day or two we will preview the APT (armoured personnel trailer) that hooks onto the Atlas. The APT mounts a heavy grenade launcher to get those pesky skulking aliens that can't be blasted into pieces by the direct fire of the APM's rotary cannon! The trailers will all be sold separately of the tractor so that you can multitask your vehicles. Stay tuned!

Posted by khurasan miniatures at 7:42 PM