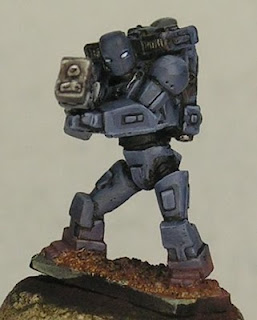 The Special Assault Brigade (SAB) is the elite strike force of the Federal Marines, used for special operations, boarding action and landings to outflank the enemy during fullscale invasions. They alone are deployable using teleport technology. They are a special breed, chosen men who receive years of training, are equipped with power armour suits, and are heavily armed with both a large dual-purpose missile launcher (capable of both anti-tank and anti-personnel action) and a heavy flame thrower. Additionally their boostpack, which has both rocket and jet boosters to move the marines at very great speed, also mounts a bombthrower armed with heavy grenades. 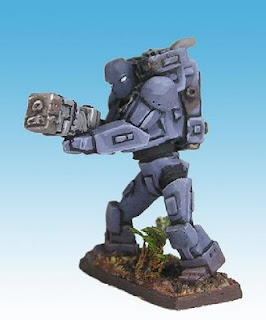 As the open battlefield is dominated by the L-HAC combat system and its supporting marine infantry, so the tunnel, landing zone and spaceship corridor are dominated by these stealthy marines, their rock-hard armour suits not much larger than a man to assure access to tight spots, to coax the enemy out of his lair. However, the SAB can always be found in the forefront of major combat operations, first on the ground, there and fighting before the others even arrive. 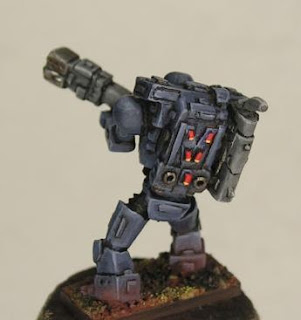 The models come five to a pack, four different troopers and a commander. Their arms are separate and have some posability and although they were originally designed to go with the respective bodies, are to some extent interchangable between the models. 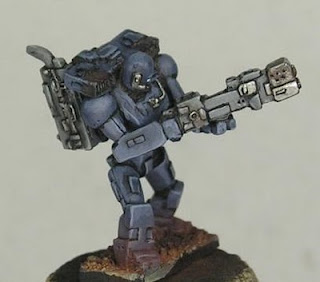 Each model comes with two arm sets to portray the trooper with either the big missile launcher or the heavy flamethrower, as well as two loose weapons so that the one not being used can be depicted snapped onto the backpack.

These will be released Wednesday, April 14, 2010.
Posted by khurasan miniatures at 8:41 AM