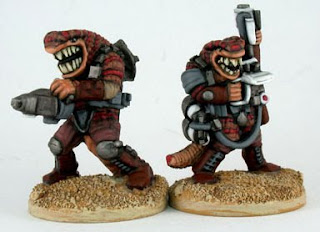 Largest, fiercest and strongest of all the Garn are the Flesh Eaters. Of course, all Garn are ravenous meat eaters, but this title is only used for these huge creatures. They bow to no one, other than the mighty Garn Hegemon warlords (who are often almost as large as Flesh Eaters anyway), and even then, the Hegemons are known to consult with the Flesh Eaters under their command as a human officer might respect the opinion of veteran sergeants in his command.

The Garn admire strength and power, and so they enjoy watching these huge champions slug it out in battle. Indeed some of the most exciting of the ad hoc gladatorial combats during the oppressive occupation of Sepulveda were the duels between a Garn Flesh Eater and a Sponk, the battles often going on for hours. Now and then the Flesh Eater would actually win (an amazing achievement indeed), and hoarse would be the throats of the Garn in attendance from bellowing their roars of approval.

Flesh Eaters wander Garn space looking for the most intense combat to be had, and are permitted to join any combat team they wish -- indeed this is seen as an honour by the unit they choose to join. 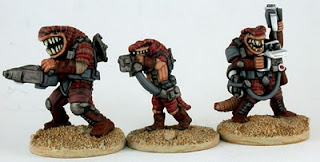 These 15mm scale models are big (even for Garn), and really imposing. Although the guns were designed as a superheavy flamethrower and a heavy fusion gun, naturally you can use them for whatever you want.

They are available now on our webstore.
Posted by khurasan miniatures at 11:29 AM