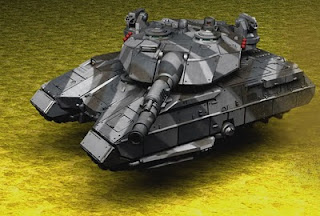 The main liability of the M5 "Siler" Federal Heavy Tank is its fiddly drive train, which is capable of giving the vehicle surprising agility but requires regular maintenance halts. The tankers and their battalion commanders are aware of this need and adjust their expectations of the vehicles accordingly, but higher echelon commanders often push the units beyond their capabilities, then complain when the tanks break down.

Another obvious limitation is the speed of the vehicle -- at 65kph it is often unable to keep up with higher speed assets and, often, enemy units. 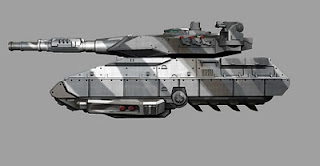 Responding to this need, a Mobility Enhancement Package (MEP) has been developed for the M5, installing two Rolls Royce T45/98 anti-grav engines, along with a replacement pack for the vehicle's molecular softpack to recalibrate for anti-grav mobility. The vehicle's engine and wheels are removed, replaced by grav plates and an anti-grav engine, which clip over existing components. Although at a top speed of 95 kph the enhanced vehicle is not vastly faster than the traditional tracked version, the speed edge is often enough to be tactically meaningful, and the MEP variant can maintain its top speed across all terrain for much longer periods than can the tracked vehicle. Anti-grav drive also provides key tactical advantages, for instance being able to achieve an altitude of 10m AGL for brief periods during engagements.

Like its real-world inspiration, our model of the M5 Siler can take the MEP swap, which simply replaces the four tread sections with the two Rolls Royce engines. This upgrade should be available within a month or so as a swappable drive train for the existing M5 Siler kit, and will include two of the anti-grav drives and a flight base that will attach to the bottom of the hull. Gamers who are clever with rare earth magnets should not have much trouble making the tracks and the anti-grav drives swappable.
Posted by khurasan miniatures at 10:16 PM