All Meat for the Sponk 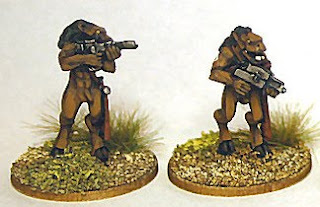 The Control Battalion sergeant peered through the goggles on its factory-sealed helmet and considered what it would say next to the obstreperous Lhurgg chieftain standing before it. They had met in the middle of the street, leaving their respective troops hanging back in the rubble on either side of the street; best to keep them apart to avoid any trouble, and have their leaders meet in neutral ground.

The sergeant was part human, but it rarely felt any emotion, as the DNA that had been mixed with that of Humanity in the process of creating the Control Battalions was dominant, to put it mildly, and the creatures that had provided those genes were coldly calculating in their every action, knowing without feeling.

And so the sergeant had the presence of mind not to immediately kill the Lhurgg standing before it, an action a more emotional being, such as a full human, might have been sorely tempted to take against this mercurial, shiftless and selfish creature.
Killing him would not do at all, as the Commander had given instructions to her Control Battalions concerning the Lhurggs: they were only to be eliminated if they were directly impeding Control Battalion activities in the sector. Otherwise, the Commander said, their disruptive presence was now actually rather useful on Sepulveda, and so even if they would not follow orders, they must be left alone. She had reasoned that if the Lhurggs were allowed to remain, some colonists might see the Control Battalions as an acceptable alternative to them. The sergeant had just enough human DNA in its makeup to see the sense of it.

Of the history of this conflict, the sergeant knew as much as it needed to – that the Commander had hired ten thousand Lhurggs to enforce her will on Sepulveda against the Sepulvedan Resistance, and they had failed to do that, occupying themselves instead with what they did best, looting and piracy, and then arguing and fighting amongst themselves over their ill-gotten gains. She had anticipated this, and indeed who wouldn’t, but what had caught her unawares was the utter imperviousness of the Lhurggs to repeated demonstrations of her displeasure, usually administered by a platoon of her Garn bodyguard dropping down from orbit to, say, snuff out a Lhurgg encampment. So shortsighted were these creatures that such ghastly lessons did nothing to affect their behavior. Far from getting the extraction of the precious Angravium mineral back on track, the invasive presence of the Lhurggs had brought it to a standstill as every colonist who could bear arms did so to make war on the Lhurggs as if they were so many locusts -- which is essentially how they behaved, swarming here, denuding an area, and then swarming to the next place, leaving many of their dead on the ground as they ebbed.

The Commander had next hired fully seven arks of Karkarines, Pelagic mercenaries who were good soldiers and much better organized than the Lhurggs but, it turned out, not much better behaved in mercenary service. They were instructed to rein in the Lhurggs and to force the miners back to work. They did not obey those orders, those seven thousand Karks, but acted instead as a force unto themselves. They mostly stayed in their encampments, watching pornographic and action hols as they wallowed in salt-water tanks and ate freeze-dried shrimp-cakes, suiting up now and then to make the occasional token foray to obliterate some Lhurggs or, more often, to cut deals with the organized crime heads of the Sepulvedan Underworld. (Karks did not have nostrils but could still smell money five clicks away.) They also extensively mapped the planet, the Karks did, although for what reason it was not immediately clear.

The Karkarine Mercenaries were of little help against the Lhurggs and of no help whatsoever against the Resistance, but at least they were easy to get rid of – the Commander just told them she would no longer pay them and they got back in their arks and departed the planet without a word, leaving nothing but pools of brine where they had once encamped to show that they’d ever been there at all. It was officially said they had all gone off to the next sector, offering their services to both sides in the ongoing Molch-Vornid War, but the sergeant knew well enough that a few Karks remained as middlemen for some bad apples in the Commander’s Garn bodyguard battalion, who were getting rich in their sales of looted Resistance weapons to the Sepulvedan Underworld. Those weapons, the Platoon Leader knew, went right back into the hands of the Resistance. It felt a rare, momentary rise of anger, but that quickly dissipated. Anger at the Garn was pointless, for against them a transhuman such as itself could do nothing.

The sergeant’s mind had wandered on these matters for a few moments, and so it had not been listening to the Lhurgg, but then again, there was little need to. The Lhurgg interjected only a few words of FedCom as he coughed and brayed in his own language to the sergeant, shoving, gesticulating, pleading and demanding. The sergeant gathered that the answer was no, the Lhurggs would not support the Control platoon’s left flank as they tried again to push their way down Alliance Street. The platoon had left eight dead on the street with the last push, not that the Control Battalions cared about their casualties, but losses made the platoon less effective. The sergeant knew of course that these same Lhurggs who refused to assist would follow right behind its platoon all the same, looting any dead (Control Battalion, Resistance or bystander) that resulted from the action. That’s why they had gathered here now -- they’d been attracted to the fight.

The Lhurgg then asked, again, for elec-chem cells to power his herd’s swords, holding his palms to the sky.

Peering through the brown mist that coursed inside its helmet, the sergeant replied -- lying, of course -- that it would consider the request, and then asked its own question, slowly and deliberately so that the Lhurgg would understand. “Has your herd seen any more Resistance fighters with rocket launchers arriving in this area?” Its question came out of a speaker on the side of its helmet in a sinister, hissing monotone.

“Edrardu gilla helma lets me think, no? I finds out, gorshu,” said Honq, the Lhurgg chieftain, in reply, and leered at the sergeant standing before him. Honq momentarily pretended to ponder the rocket launcher question, squatted slightly, grunted and shot a bolus of warm, wet feces onto the ground, splattering the boot of the sergeant, causing some of the Lhurggs reclining on the rubble to bray and hoot.

“Helma” -- the Control sergeant rolled the word around in its brain. This meant “helmet,” which is what everyone called the Control Battalions on Sepulveda, “the helmets,” because they never removed them.

Honq turned to his cackling herd and said, in their own language, “these helmet creatures have elec-chem cells, for I asked for some and they did not say no, so they must have some! What do you say to this, my kin?” The herd looked up, and each of them pulled his Huk-Huk sword a little from its scabbard, then let it slide back down, click. Having run out of battery power, their Huk-Huks had been quiet for some time, although they still had considerable bite, even if their two adjacent blades were not reciprocating back and forth under electrical power. The herd had some disposable blasters, it was true, but as everyone knew, they couldn’t hit anything with them – the Lhurgg was defined by his Huk-Huk, and the Huk-Huk existed to make its grinding sound as it bit into the flesh of the foe.

The herd wanted those elec-chem cells. 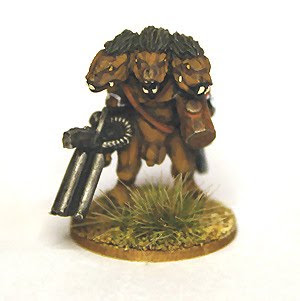 “Here, come my child,” shouted Honq, and the Lhurgg giant rose, lifting himself heavily from the street using his mallet as a prop. Fully nine feet tall, the giant had three heads, which had been quietly arguing about something but they were now quiet and attentive as they frowned at the Control platoon. This was met by clicking and whirring sounds as the goggles mounted on Control helmets zoomed and focused on the giant, and on other Lhurggs who were now materializing from the rubble and gathering around. In the giant’s right hand they saw the assault cannon, three barrels now yawning at them.

The sergeant had counted the Lhurggs before, but now that they were gathering it saw that it had underestimated their numbers, and there were sixty or more of them, more than the remnants of its platoon, most with disposable blasters and all with the crude power swords they preferred in close combat. The swords were drawn and their chieftain barked and spat at them, pointing to the Control troops. They began advancing.

They were, in the sergeant’s judgment, now directly impeding Control Battalion operations in this sector. It hissed and went down on its knee.

On the roof of the old ministry building, Resistance Corporal Hallan, looking out for the Control troops with his binocs, witnessed it all.

He knew they wouldn’t come strolling down this street, of course, but he might see something anyway if he kept watch. And sure enough, out comes a Control leader walking cautiously into the middle of the street, far out of range, and then coming to join him from the other side of the street, a feathered Lhurgg chieftain. They talked, uneasily, or rather the Lhurgg did most of the talking. He could hear nothing of the meeting, for these old Resistance binocs didn’t have aurals. He had feared that the savages would join up with the Control platoon as they again tried to push down this thoroughfare, and considered asking Lili if they could drop a few rockets in amongst them at this extreme range, but before he could do so, and much to his amazement, a battle had begun …

… flashes of white light, obviously from Control pulse rifles, their normal disciplined fire etching streams of light across the street …

… the heavy thunder of a Lhurgg giant’s assault cannon …

… Lhurggs bounding into view, attempting to cross the curtain of fire, their crude swords held high overhead, some making it …

… the unmistakable whir as a Control drone’s propeller kicked to life as it took to the air, firing grenades across the street …

… the Control unit leader kneeling, still in the middle of the street in advance of all its troopers, laying down a steady fire, killing one charging Lhurgg that was virtually on top of it ….

… and finally, gradual quiet, except for the occasional hiss from a pulse rifle and the whirring of the Control drone’s propeller as it now floated into view, hovering cautiously across the street, evidently checking out the position the fleeing Lhurggs had held, the Control leader following slowly behind it, finally the rest of the platoon advancing into view.

His enemies had just made war on each other, and Hallan was relieved. But felt no great pleasure. There was nothing new in this. Everyone fought everyone on Sepulveda, or so it sometimes seemed. As the saying went, it’s all meat for the Sponk -- a saying that could be taken quite literally out past the city limits, where Lhurgg and human skulls mingled with emptied Control helmets at the bottom of the predators' burrows.

Hallan let his binocs swing around his neck, and called Lili’s adjutant to report what he’d just seen.

Models of the Lhurggs have just been added to our 15mm line and are available now. They were sculpted by Whiff Waff and these samples were painted by Artmaster Studio. Lhurggs are tall, slender creatures that go about naked and are usually armed with a cheap disposable blaster and with the Huk Huk electrical sword.

Posted by khurasan miniatures at 9:16 PM