War in Another Dimension: Species 84 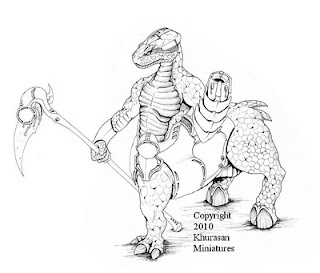 Species 84, so named by Federal scientists because no communications from them have been decipherable to date to determine their name for themselves, are creatures that live in another dimension, and have on occasion travelled to ours as part of their 7,000 year war with the Ti Monhids.

The image shows a Species 84 life form with a ceremonial staff, but in combat the species wears instead a scythe-like glove on its right arm. They appear to human eyes to be reptilian and centaur like, but nothing whatsoever is known of their physiology.

Much more is known about the Ti Monhids, their foes, although these are also mostly unknown in our dimension. The Ti Monhids are an extremely aggressive, imperialist race who made an assault on the realm of Species 84 but got more than they bargained for, as Species 84, an incredibly advanced species, obliterated their invading armies and laid waste to their frontier as a warning. The Ti Monhids, knowing no fear and seeking only war and conquest, redoubled their efforts and launched an all-out research and development effort to find a weapon to defeat Species 84. They eventually bred the creatures known in our dimension as Space Demons.

The war has occasionally spread into our dimension, as the Ti Monhids have attempted to outflank Species 84 using dimension travel. It appears that Species 84 continues to hold the upper hand in this war, but this has not deterred the Ti Monhids from their continued efforts to exterminate Species 84, and the Space Demon hordes have gone a long way toward levelling the playing field. Occasionally Space Demons have gone feral in our dimension, which explains theire presence.

These incursions into our dimension have mostly occurred in the space of the Pelagic Dominate, and when Species 84 enters our dimension to fight the Ti Monhids, Pelagic space is almost always where the battles occur. These titanic struggles lay waste to entire star systems, and Federal Intelligence postulates that this is the reason for the imperialist efforts of the Dominate -- to find new systems to colonize to escape the cataclysmic destruction of the Extra-Dimensional War.

The Ti Monhids are the closest that any species in our dimension have seen to pure evil. No image is shown of them here as it is a violation of Federal law to do so. It is thought by some that these creatures may have occasionally explored our own planet in its early history, which would explain the origin of demon myths, but this is pure conjecture. They are tall and lanky, usually about 2.5 meters tall, of essentially bipedal form, have long slender heads lined with eight unblinking eyes, and wear a body suit that continually changes colour, which includes a small cannon growing out of its back, elevated atop a rod, which swivels to fire in all directions, freeing the hands of the Ti Monhid to engage in hand to hand combat, at which they excel.

Both Species 84 and the Ti Monhis have incredible strength and apparently are considerably denser than creatures found in this dimension making them incredibly hard to kill and making armour unnecessary (their garments sometimes appear to be armour like, but seem to be mostly decorative or to show rank). Most frightening is their ability to freely engage in extra-vehicular activity in the void of space, which causes them no harm and can be endured by them indefinitely. This possibly explains the mysterious toughness, and resistance to a void, that the Space Demons themselves show.

Space Demons instinctively obey every wish of the Ti Monhids, which, like all communication by them, is conveyed telepathically. The Ti Monhids, and even more so Species 84, are capable of using telepathy in sustained attacks, and these are especially deadly to vertebrates of our dimension. Federal scientists and intelligence officers have found a way to retrieve Ti Monhid communications, and to some extent to decipher it, which has been the source of much of our knowledge of the species and the Extra-Dimensional War. Efforts to control Space Demons using simulated telepathy have to date been unsuccessful.